Bill Gates is not one to join any bandwagon, or spaceship, for the matter. 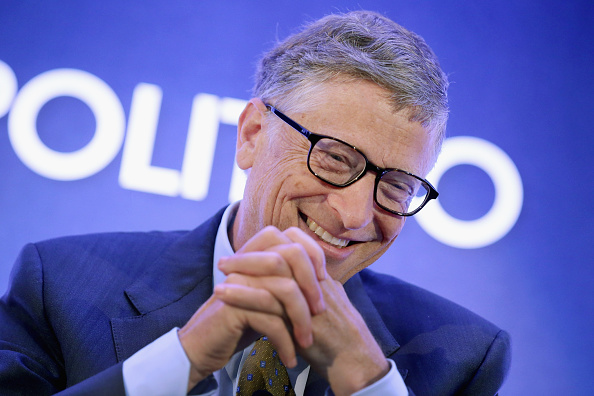 (Photo : Photo by Chip Somodevilla/Getty Images)
WASHINGTON, DC - SEPTEMBER 29: Bill Gates, founder of Microsoft and co-chair of the Bill and Melinda Gates Foundation, talks about the Ebola crisis in West Africa during the Politico 'Lessons from Leaders' series at the Bank of America offices September 29, 2014 in Washington, DC. Gates talked about how his foundation's work to erradicate polio in Nigeria has been helpful in starting to combat the Ebola epidemic in Liberia, Guinea and Sierra Leone, which is the largest outbreak ever recorded.

In a new interview, billionaire Bill Gates said Mars does not interest him like Earth. Instead of following his fellow billionaire Elon Musk to invest in Mars, Gates would rather have his money invested in something that can make Earth safer and better - such as the much needed COVID-19 vaccine.

Gates bravely revealed that he does not "think rockets are the solution," on Kara Swisher's "Sway" podcast, something few people now would say.

Apart from the COVID-19 vaccines, Bill Gates added that he'd rather dedicate his financial assets to address climate issues and many more other public health crises on Earth.

He'd rather dedicate funds to addressing climate and public health crises on Earth, as reported by Business Insider

It can be noted that other tech tycoons as him, Elon Musk and Jeff Bezos already have dumped billions into private space travel. Both reportedly wanted their money to good use - which is to create a whole new world outside the current planet people live in. They reportedly want to establish bustling colonies outside of Earth's atmosphere, which sounds great, but not for Bill Gates.

"No, I'm not a Mars person. I know a lot of Mars people," he said. "I don't think rockets are the solution. But maybe I'm missing something there," he added.

Gates, who appeared on the podcast to promote his new book, "How to Avoid a Climate Disaster," said he's interested in using his wealth and foundations to directly address many of the still unaddressed greatest challenges on Earth. He confessed to Swisher he's not too keen on buying a ticket to space either.

"I'm not going to pay a lot of money because my foundation can buy measles vaccines and save a life for $1,000," Gates shared. "Anything I do, I always think, 'OK, I could spend that $1,000 buying measles vaccine.'"

Bill Gates also added Tesla's green car is not the only solution to climate change. instead, he believes that when it comes to addressing climate change and curbing emissions in the long-term, more attention should be poured to industries that are difficult to make greener, like steel, meat, and cement.

He called the electronic cars as "the easy stuff."

"Having near term goals is very important. But if that is all you focus on, then you will only work on the easy stuff, like passenger cars - which Tesla and others have done great work there. But we are basically not doing enough on the hard stuff: steel, cement, meat," he explained.

Of course, he's not out to downplay Musk. Tesla's contributions to the climate change issue cannot be denied.

"It's important to say that what Elon did with Tesla is one of the greatest contributions to climate change anyone's ever made," Gates said. "Underestimating Elon is not a good idea."

READ MORE: How to Talk About Money When You're in a Relationship