China Beats US as Top FDI Destination; Is this President Biden's Biggest Challenge?

Foreign companies are shunning the United States in favor of China for direct investments.

Analysts claim this is because, despite the raging pandemic, China has a better hold of its economy. Not only did it have more superior management of the COVID-19 crisis, but its economy is also booming - something the United States cannot say at present.

Based on the figures provided by a report by the United Nations Conference on Trade and Development, foreign direct investment in the US has plummeted by an unprecedented 49% last year, which amounted to a total of $134 billion lost in 2020.

In contrast, numbers would show that the US experienced a 4% growth, amounting to $163 billion in the same year.

China Overtakes US in FDI Inflows

What made the year 2020 remarkable for analysts is that apart from the coronavirus pandemic taking the world by surprise, this was also the first year in history that foreign direct investment in China overtook that of the US.

This makes China the world's largest recipient of foreign investment flows, as reported by CNN.

Some analysts, however, had explained that even though COVID-19 management was a massive factor in this economic turn of events, the drop in FDI in the United States started way before the pandemic began.

There was already a gradual decrease starting in 2015. Experts claimed that it was then President Donald Trump's policies that truly hurt foreign investment, more so from Chinese firms.

Apart from Trump's policies, the decline was also attributable to the growing economic uncertainty outside of the United and worldwide.

The said decline in foreign direct investment into the US in 2020 is most observable in wholesale trade, financial services, and manufacturing, the report showed. There was a significant drop of 41% in International mergers and acquisitions, including US assets' sales to foreign investors.

Meanwhile, China had even experienced explosive economic growth since then, including last year, when it recovered relatively quicker than the rest of the world economies from the pandemic.

In 2020, the giant saw an increase of 2.3% in its economy, while others saw theirs shrink. 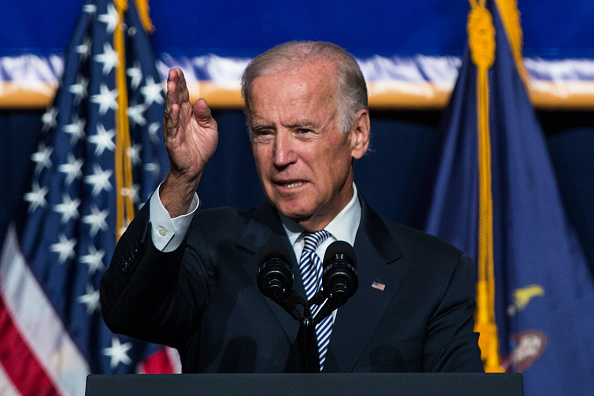 (Photo : Photo by Andrew Burton/Getty Images)
US Newest President Joe Biden faces great challenge in returning the US on top.

According to an Op-Ed by CNBC, this will be the greatest challenge for the newest US president Joe Biden.

The author anticipates that after the Chinese President Xi-Jinping delivers his keynote on the World Economic Forum on its first virtual meeting, Joe Biden had to think hard on how to manage relations with China.

It is said to be Biden's most immediate and most defining foreign policy challenge today.

So far, President Biden already promised to undo the damages caused by the Trump administration, especially about how it allegedly mismanaged the COVID-19 pandemic.

Biden announced loud and cleared his determination to heal and unify the United States. He already made claims about unleashing a $1.9 trillion COVID relief package to help the economy, and bills on higher infrastructure spending bills will reportedly follow.

Internationally, Biden already said he would be rallying democratic partners and allies to fight China's alleged authoritarian visions and strategies.