On Tuesday, Jan. 19, several companies have been performing well in the stock pre-market. Interestingly, one of the possible reasons of the greatest move is the much-awaited inauguration day of President-elect Joe Biden, happening on Wednesday, Jan. 20.

Here are the biggest names of stock gainers for the third week of the month.

Which shares gained most this week 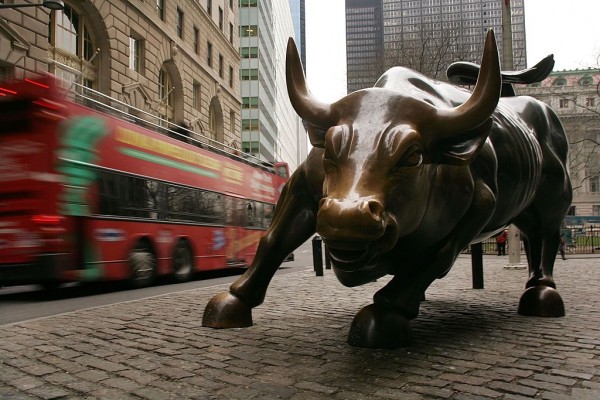 (Photo : Photo by Spencer Platt/Getty Images)
A tour bus passes the Wall Street bull in the financial district January 22, 2007 in New York City. In a study commissioned by New York City Mayor Michael Bloomberg and U.S. Sen. Charles Schumer (D-NY), it was determined that New York could lose its place as the financial capital of the world in as little as 10 years

We've all been waiting for the (so far) highest bullish rate in US stock market, for the year 2021. Though it seemed like we're still early from this event, few companies in the stock market have already shown tremendous movement in the pre-market chart.

As first collected via CNBC, here are the top five company shares that shown biggest bulls, as of Tuesday, Jan. 19.

Comerica (CMA) - Dallas-based financial services company Comerica is one of the highest bulls in today's pre-market. With quarterly earnings of $1.49 per share, it has beaten the estimated 30 cents a share.

E.W. Scripps (SSP) - One of the early jumpers in the pre-market is the E.W. Scripps company that jumped to 10% increase.

Logitech (LOGI) - Software and computer company Logitech also joined the list with the company shares, reaching 3.7% increased in the pre-market.

Bank of America (BAC) - In its recent report, Bank of America reported that it profited 59 cents per share, in quarterly basis -- with 4 cents a share above estimates.

Goldman Sachs (GS) - Goldman has surely proved itself in the pre-market this week, with the company earning $12.08 per share for the fourth quarter. This is above the estimated consensus of $7.47 per share. So far, the biggest earner, as of now.

(Photo : Photo by Rick Loomis/Getty Images)
Democratic Presidential candidate Joe Biden lays out his economic policy plan to help rebuild the middle class during a campaign stop at the Scranton Cultural Center on October 23, 2019 in Scranton, Pennsylvania. Biden has been a frontrunner for the candidacy but Elizabeth Warren has been gaining in recent polls.

Just like any official that seated in the presidency, Joe Biden's Wednesday inauguration event is set to have a huge effect in the stock market.

As Yahoo reported, Biden's stimulus package  worth $1.9 trillion could send investors rushing into more cyclical stocks in the retail, energy and materials space in advance of strong lifts to the respective sector earnings growth rates.

"The spending comes at an interesting junction for analysts and investors as it will no doubt mean further EPS upgrades. It will also mean that many early cycle S&P 500 sectors will see faster earnings revisions than the popular FAANG+ and IT which dominated investor attention in 2020," points out Jefferies strategist Sean Darby.

For now, it's still too early for stock market celebration.