The electric-car maker Tesla Inc. will make its debut into the benchmark S&P 500 index.

On Friday, Tesla had a rising to a record high amid the trading, Reuters reported. The company's CEO Elon Musk will be the most valuable admitted to Wall Street's main benchmark. Also, the billionaire will be accountable for 1.69% of the index, as per the S&P Dow Jones Indices analyst Howard Silverblatt. 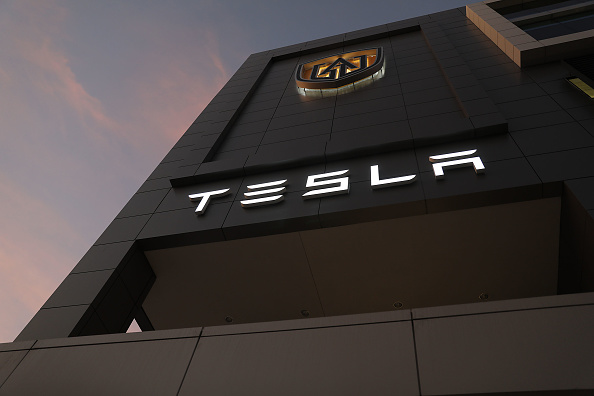 (Photo : Joe Raedle/Getty Images)
Tesla Stock Falls As Company's Q4 Numbers Miss Expectations MIAMI, FLORIDA - JANUARY 03: The Tesla name is seen on the exterior of a dealership on January 03, 2019 in Miami, Florida. Tesla Inc. shares have fallen as the company reported fourth-quarter Model 3 deliveries just below estimates and said it would lower the price of its cars.

Since mid-November, Tesla's shares surged to nearly 70% when the debut was announced and in 2020, it soared to 700%. Tesla bought $90.3 billion of shares in the S&P 500 by the end of Friday's session so the portfolios reflected the index, according to Silverblatt.

S&P said earlier in December that the change is effective prior to the open of trading. Meanwhile, Tesla replaced the Apartment Investment and Management Co. For every $11.11 Tesla moves, the S&P 500 will have one point, while S&P's 2021 earnings ratio will increase to 22.6 from 22.3.

Tesla's stock surge skyrocketed its market cap to almost $600 billion, making the company the sixth valuable U.S.company with many investors viewing it as overvalued. The California-based company is the most traded stock by value on Wall Street, so far. It has $18 billion worth of shares exchanged on average over the past 2 months. According to Refinitiv, Tesla beat Apple, which is in second place with an average of $14 billion in its daily trades.

Tesla had a suprising accomplishment

Tesla lost sales in the middle of last year and was not enough to cover expenses. The company's debt payments also loomed. Wall Street analysts raised the possibility that Tesla cannot pay its bills and needs to restructure financially. Since then. The electric-car maker's shares soared and rose to more than 700% for this year only.

According to The West, Tesla's rise to the ranking of the top 10 biggest U.S companies and the world's most valuable automaker is a surprising accomplishment knowing it lost $1.1 billion in 2019's first half. Even Tesla's CEO Elon Musk claims that shares are overpriced.

In the third quarter, global sales hit almost 140,000. The debt was reduced with proceeds from stock offerings, and Tesla is making two huge factories to make new vehicles and meet the demands. Followers invested billions and Elon Musk became the world's third-richest man, as per Forbes.

For years, Tesla has engendered strong divisions on Wall Street, and its rise from a near-collapsed to a high valuation is not exempted. Several investors who drove Tesla's market cap higher are those who brought the stock after a five-for-one split reduced the price of a single share.