Tesla will suspend Model S and Model X vehicles production for 18 days starting in late December, as per an email to a factory staff seen by CNBC.

The staff could "volunteer" to other Tesla locations 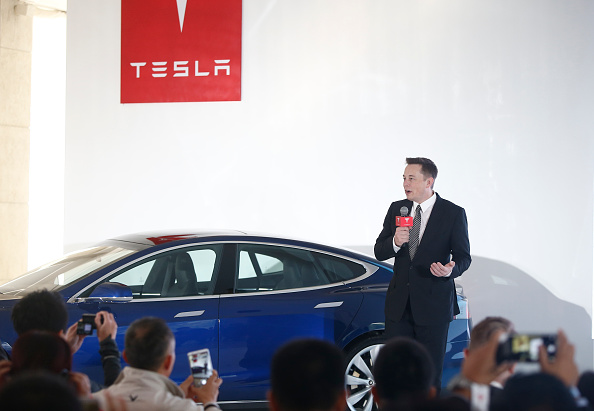 (Photo : VCG/VCG via Getty Images)
Tesla Update v7.0 Enables Self-driving Test In China BEIJING, CHINA - OCTOBER 23: (CHINA OUT) Elon Musk, Chairman, CEO and Product Architect of Tesla Motors, addresses a press conference to declare that the Tesla Motors releases v7.0 System in China on a limited basis for its Model S, which will enable self-driving features such as Autosteer for a select group of beta testers on October 23, 2015 in Beijing, China. The v7.0 system includes Autosteer, a new Autopilot feature. While it's not absolutely self-driving and the driver still need to hold the steering wheel and be mindful of road conditions and surrounding traffic when using Autosteer. When set to the new Autosteer mode, graphics on the driver's display will show the path the Model S is following, post the current speed limit and indicate if a car is in front of the Tesla.

The staff has been forced to take unplanned and unpaid time off work, which Tesla has said they workers can "volunteer" in other business locations. Tesla's Fremont, California production will halt on December 24 and is expected to resume on January 11, according to CNBC.

Affected staff will be given one week of pay for the compulsory work off, based on the email sent Friday, with some paid holiday days. However, workers will have five days of unplanned and unpaid off work, as per Business Insider.

.Tesla management explained in the email that the company would give "limited paid opportunities" for its employees to work in other areas of the company during the production halt. Otherwise, workers can "volunteer" in sals of deliveries, side of the business, it said.

In the email, Tesla management said there would be "limited paid opportunities" for staff to work in other parts of the company during this time. Otherwise, staff can "volunteer" in the deliveries, or sales, side of the business, it said, per CNBC.

"We would like you to take the opportunity to refresh or spend time with your family, so Tesla will be giving you a full week pay for the week of January 4," Tesla added.

On Friday, in a separate email to staff, Tesla CEO Elon Musk said that the demand is "quite a bit higher than production this quarter," that's why he suggested employees ramp up production as much as possible for the rest of the year. In late September, Tesla's Model S and X vehicles' sales reached 15,2000 compared to 124,100 for its Model 3 and Model Y vehicles.

The temporary shutdown followed after a string of issues with both vehicles for the automaker made headlines. Tesla recalled over 9,000 Model X vehicles in late November due to a cosmetic adhesive that could fly off. The recall came after it initially recalled 15,000 Model X's due to power-steering problems and in October, 30,000 Model S and X over suspension problems.

Allegedly, staff on the production offered full pay for one week only with some paid holidays and were asked to take unpaid days off or accept "limited" work with Tesla's other sites during the production halt. According to MarketWatch via MSN,

Tesla has not yet responded to a request for comment on Sunday, as per MarketWatch. On the other hand, it is not a typical move for Tesla to pause its manufacturing for a short period while it improves its production line.

An end-of-the-year crush to deliver its vehicles is Tesla's traditional endearment to meet production targets and to comply with its January 1 deadlines for electric-vehicle tax breaks for its clients.

Earlier this year, the company targeted delivering 500,000 vehicles in 2020. It maintained the guidance in its third-quarter earnings report in October. S&P 500 index will join Tesla on December 21, and its stock has skyrocketed this year. Tesla's stock rose to almost 630% year to date compared to S&P's 13% gain.