5 Lottery Winners Stories: What This Gamble Teaches You?

In November, MoneyTimes featured lottery winners who went broke and became even miserable when they won. But these people shouldn't affect you on trying as many lottery winners still made the right decision on where to use their winning money, and it's for the good of their lives and the lives of other people around them. 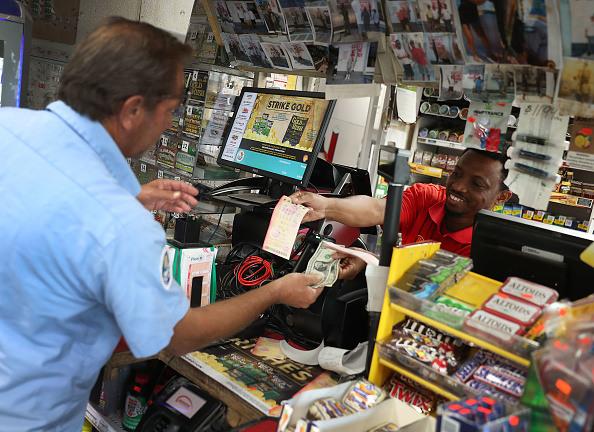 (Photo : Joe Raedle/Getty Images)
Powerball Drawing On Wednesday For 750 Million Is One Of The Biggest Jackpots In Game's History BOYNTON BEACH, FLORIDA - MARCH 26: Jackson Mauvais (R) sells a Powerball ticket to Ken Meese at the Shell Gateway store on March 26, 2019 in Boynton Beach, Florida. Wednesday's Powerball drawing will be an approximately $750 million jackpot which would be one of the biggest in US lottery prize history.

A sudden windfall would determine if a person could manage it or not. However, even more lottery winners chose to use their money to make a positive change.

Luckily, while there are many people who don't know how to handle a sudden windfall, there are even more lottery winners who use their winnings to make a positive difference in their lives and their communities. Below are five lottery success stories that will inspire you to try the lottery be a part of the positive change in your community, according to The Balance Everyday:

Neal Wanless, 23, was having bad luck in 2009. The cowboy was behind on his property taxes and tried to sell scrap metal to have a little cash. Wanless was one of the poorest ranchers in South Dakota, one of the least prosperous places in America.

The poor cowboy took the risk and spent a little of his hard-earned money on a Powerball ticket. Neal's gamble did not fail him when he won one of the biggest Powerball jackpots in history. The lump-sum payment ended at $88.5 million.

The cowboy continues working in the ranch and puts part of the money to help others in their community, as per CBS News. Timothy Grablander, mayor of the town where Wanless' farm is located, said, "That's just the way it is in this part of the state, people help people, we know one another."

2. A Single Mother of Five Wins

Cynthia Stafford took her brother's five children when he was killed by a drunk driver and raised them as a single mother. At the same time, Cynthia helps her father earn to meet their daily needs.

With her large family, Cynthia often had tight money and struggled to pay bills. In January 2007, she dreamt of winning the lottery. According to Marie Claire, in 2004, Stattord started focusing on winning the lottery with the jackpot of $112 million.

The single mom used various methods of attracting luck, including sleeping with the lottery number note under her pillow, visualizing how it would feel once she won, and meditation on winning a $112 million jackpot. After three years, Stafford won the same jackpot she had dreamed.

3. Family of winners united to improve their city

Pearlie Mae Smith has been vocal about the importance of giving back to their community. She let her seven children grow up knowing how to volunteer as community gardens and soup kitchen workers.

When Smith won the $429 million Powerball jackpot, it was clear where they wanted to use the winning money to do more good for other people in the community who were not as lucky as them.

The Smith family started a foundation to provide funding for grassroots organizations that are working in improving the lives of the people in their hometown in New Jersey. The foundation's priorities include education, Christian education, neighborhood development, and supporting youth and families in their area.

A high school teacher named Les Robins thought it was a shame that kids nowadays don't grow up doing the activities they had enjoyed as children. So when Robin won a $111 million Powerball jackpot, he decided to use the funds to make his pwn camp for the kids.

5. A man donated jackpot money to help others fight a disease that killed his wife

When Tom Crist won $40 million on the lottery, he donated every dollar to help others fight the disease that killed his wife. Tom lost his wife due to cancer when he was already retired and had enough money saved up, while his children were adults and doing well in their lives.

That's why Tom did not keep any of the winning money for himself. Instead, Tom donated the entire lump-sum to a cancer charity in Calgary, and his kids supported his decision.

Read also: 6 Surprising Differences Between A Rich vs Poor Mindset