California Sues Amazon: "They Made Billions, While Workers at Risk Amid Pandemic"

The California Attorney General filed a lawsuit against Amazon, seeking the information at its warehouses in the state and how the company manages COVID-19 cases as well as safety measures. 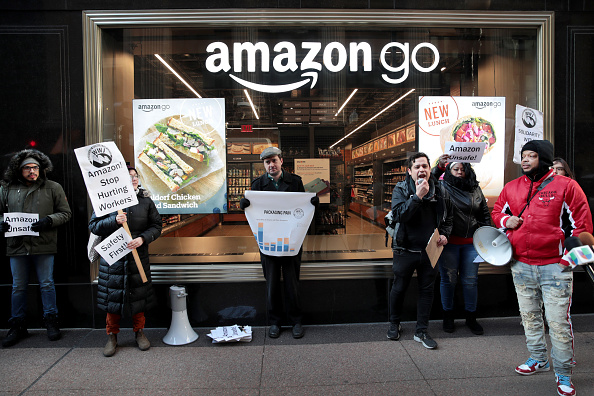 (Photo : Scott Olson/Getty Images)
Warehouse Workers For Justice Hold Press Conference On Injury Rates At Chicago Area Amazon Warehouses CHICAGO, ILLINOIS - DECEMBER 10: Former injured Amazon employees join labor organizers and community activists to demonstrate and hold a press conference outside of an Amazon Go store in the loop to express concerns about what they claim is the company's "alarming injury rate" among warehouse workers on December 10, 2019 in Chicago, Illinois. According to the community group Warehouse Workers for Justice, some Amazon warehouse facilities have injury rates more than twice the industry average, with peak rates occurring during the holiday season.

Xavier Becerra, California Attorney General, filed a petition with the Sacramento County Superior Court requesting the court to order Amazon to comply with "outstanding investigative subpoenas" about the ongoing investigation into the company's workplace safety measures.

In May, Becerra pressed Amazon to provide information regarding the numbers of warehouse workers who contracted the coronavirus and information about the company's actions to protect those employees, as per the lawsuit.

According to Fox News, Amazon allegedly failed to adequately comply with California's law requests to give necessary information and documents related to the company's COVID-19 protocols, including cleaning procedures and examination of its sick leave. Besides, the state requested data on the number of COVID-19 infections and deaths at Amazon warehouses across California.

Attorney General Becerra said in a statement, "Amazon has made billions during this pandemic relying on the labor of essential workers. Their workers get the job done while putting themselves at risk."

He added that knowing if the workers are receiving the protections on the job that they deserved to under the law is crucial. Amazon delayed responding to the investigative requests, and they are seeking a court order to fully compel the e-commerce giant to comply with the investigative subpoenas.

The investigation is in process, and no determinations have been made about Amazon's COVID-19 protocols because of the company's "limited responsiveness," the Attorney General's office noted.

For several months, Amazon workers have complained about the company's working setup and even staged protests nationwide, including outside Amazon's CEO Jeff Bezos' home.

The retail giant also faces a lawsuit from Christian Smalls, the company's former employee. Amazon claims that Christian was fired for putting the safety and health of others at risk for violating his terms of employment after making an organized walkout.

In a statement, an Amazon spokesperson told Fox Business that the company is "puzzled by the Attorney General's sudden rush to court," especially since Amazon has been cooperating with the state for months.

In a blog post, Amazon said it expects to invest almost $10 billion on COVID-19-related initiatives by the end of 2020, keeping employees safe and getting products to customers, such as the $500 million special holiday bonuses for their continued hard work amid the pandemic.

In October, Amazon disclosed that nearly 20,000 of its essential workers in the U.S. tested positive or presumed positive for the coronavirus. But the e-commerce giant explained that the infection rates among its workers are below the cases found within the U.S. general population.