Amazon CEO Jeff Bezos' leading online sales company could fall over the next decade and go bankrupt, as per the retail expert Doug Stephens.  Retail Prophet's founder and advisor to several world's most respected brands predicts on his Business of corporate Fashion page, "the end of Amazon."

Stephen wrote, "I think that in ten years Amazon is going to decline and these are just some of the reasons." Here are the reasons why Amazon could end up bankrupt, according to Entrepreneur: 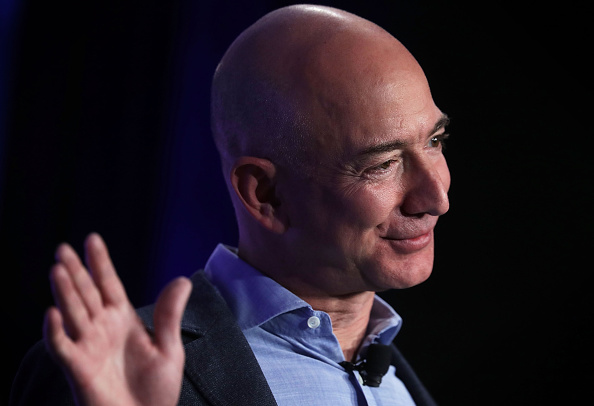 (Photo : Alex Wong/Getty Images)
Founder And CEO Of Amazon Jeff Bezos Speaks On Advances In Artificial Intelligence WASHINGTON, DC - MAY 18: Jeff Bezos, founder and Chief Executive of Amazon.com and owner of The Washington Post, participates in a conversation during the event "Transformers: Pushing the Boundaries of Knowledge," May 18, 2016 in Washington, DC. The Washington Post hosted the event focusing on "breakthroughs in artificial intelligence, commercial space travel, education and health care."

It is dangerous that Jeff Bezos aims to maintain the same long-term operating model, the specialist considers. The tycoon said in statements taken up by Business of Fashion that he and his company knows customers want low prices and that it will be true ten years from now. Customers wish for fast delivery and a wide selection, as per Bezos.

However, Stephens claims that people do not look at items just because they want the products. Customers also want the full shopping experience like touching the products, getting out of the house, trying new things, comparing items with each other, or getting inspired. Therefore, the disadvantage of the online sale giant is limited to online purchases.

Focus on customer service could be a lost

Jeff Bezos at the helm is considered an influential leader that a company would hardly function without him.

The expert assumed that if Amazon continues its expansion, the figure of Bezos could disappear or dissipate. It would be possible that you lose your original mission, which is customer satisfaction and prioritizing the processes based on data.

Other reasons for Amazon's potential downfall were Stephens, including the allegedly toxic work environment and partners' migration to other friendlier delivery platforms.

These factors' combination could lead Amazon to suffer losses in the next decade and be replaced by another similar platform that offers better conditions for workers, customers, and partners, as per Entrepreneur.

According to The Guardian via MSN, Jeff Bezos accumulated far more added wealth over the last nine months. He could provide each Amazon employee with $105,000 and remain rich as he was before the COVID-19 pandemic. As of October, over 20,000 US-based Amazon workers had been infected by the coronavirus.

The estimate came from Amazon, as per The Guardian. Amazon has no independent verification and has not revealed how many of its employees have died due to COVID-19.

The upcoming holiday season has pushed Amazon to acquire 400,000 workers as the pandemic fueled online shopping. However, the job's pay is not that enough, and many are unsafe.

Decades ago, workers in large corporations could reveal unsafe working conditions by complaining to their union, which pressured their employer to fix the problems, or they would be fined through the Occupational Safety and Health Administration.

The pandemic has fired at least two white-collar employees who denounced conditions at Amazon's warehouses and several warehouse workers who raised safety concerns to media outlets.

A survey conducted in May by the National Employment Law Project revealed that one in eight employees "perceived potential retaliatory actions by employers against staff in their company who raised health and safety concerns" regarding the coronavirus.