Southwest Issues Layoff Warnings to Over 6,800 Employees, a First for the Airline

Southwest Airlines has issued layoff warnings to more than 6,800 employees that may be furloughed in spring.

The airline told CNN that they warned 6,828 workers on Thursday that they would potentially be furloughed in the spring. It will be the first in Southwest's nearly 50-year history if the layoffs take place. 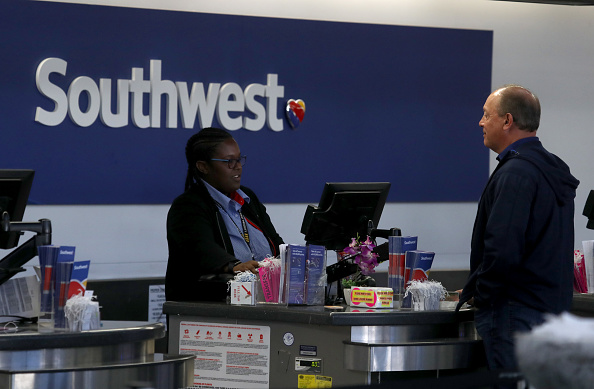 (Photo : Justin Sullivan/Getty Images)
Southwest Posts Q1 $200 Million Revenue Loss Due To Boeing MAX Groundings SAN FRANCISCO, CALIFORNIA - APRIL 25: A Southwest Airlines worker helps a customer at San Francisco International Airport on April 25, 2019 in San Francisco, California. Southwest Airlines reported a loss of $200 million in their first quarter earnings after having to cancel over 10,000 flights in the quarter due to the grounding of Boeing 737 MAX planes. Southwest has 34 MAX jets in its fleet.

The layoffs include 1,176 customer service agents, 1,221 pilots, 1,500 flight attendants, and 2,551 ground crew members who handle baggage, cargo, and restocking planes. The carrier said the cuts would take effect on March 15 or April 1 for different workers groups.

Earlier this year, U.S. airlines like Southwest received a total of $25 billion in federal assistance with the condition that they will not implement any involuntary job cuts through the end of September.

On October 1, the United and American Airlines furloughed 32,000 employees, the day the prohibition ended.

Delta Airlines, on the other hand, avoided involuntary layoffs as the employees took early retirement offers and voluntary buyouts.

The airline's pilots agreed to the change in their contracts that will reduce labor costs. However, almost 16,000 other job cuts were instituted across the rest of the airline industry before Thursday's announcement of Southwest.

Southwest was typically included among the most profitable major U.S. airlines. But the airline has reported losses worth $2.75 billion through the first nine months of the year, also its first annual loss in history.

According to USA Today, companies must send warnings about the looming large layoffs required by the federal Worker Adjustment and Retraining Notification Act (WARN). Most airlines, primarily the United and America, have issued notices and laid off tens of thousands of workers.

Since October, the nation's largest airline has been in negotiations regarding the pay cuts and other cost savings to offset its need for over $1 billion in "overstaffing costs" because of the depressed travel demand from the COVID-19 pandemic.

In a video sent to the airline's pilots on Thursday, the head of the Southwest Airlines Pilots Association, Jon Weaks, blasted the company's lack of faith in negotiation.

Weaks said the union proposed several options for the company's cost-saving goal, but the labor relations officials have rejected them.

Weaks added that he would "put a dollar value on 49 years of Southwest Airlines and its commitment to our pilots who are part of its family: $220 million" if Southwest CEO Gary Kelly proceeds with the layoff plan.

The $220 million is the amount the airline would save if pilots agree to the 10 percent pay cut the Southwest is seeking from the employees.