A New Jersey owner who attended a Staten Island rally was arrested for defying the state's COVID-19 restrictions said the lockdowns "nonsensical."

This week, Danny Presti, the New York bar owner, had his supporters gathered in front of the business to protest his arrest following the coronavirus restrictions' neglect and refusing to close down the bar. 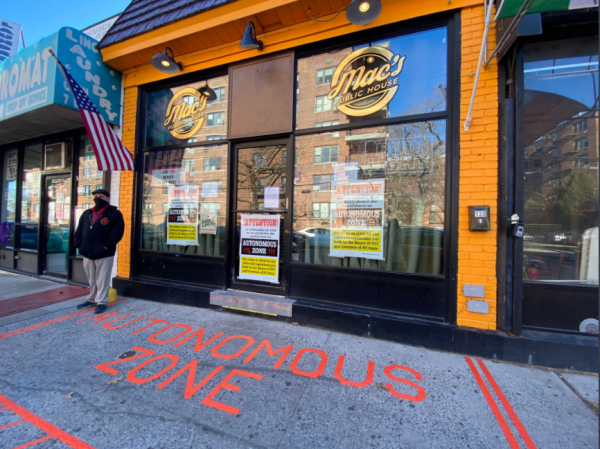 The owner of Atilis Gym in Bellmawr, N.J., Ian Smith, and co-owner Frank Trumbetti faced the same consequences for reopening in violating the state and local coronavirus guidelines. The violations led to Smith being arrested, and his building boarded up by local officials, according to Fox News.

Smith told "Fox & Friends: "I was there because [Frank Trumbetti] and I received an overwhelming amount of support and love, and that helped us stay strong, and it helped us stay open. You know, we have been open ever since. So I have to return the favor and encourage every other small business owner."

On Tuesday night, approximately 60 people assembled in front of Mac's Public House in Staten Island after Presti was arrested in handcuffs. Many businesses, especially bars and restaurants, have been affected by the government-mandated closures to curb the spread of the virus.

Meanwhile, Smith said that since April, the gym had not charged its members for using their facility because New Jersey Governor Phil Murphy took their business license due to the New Jersey court system.

The gym is "relying strictly on donations," Smith noted and pressed that the lockdowns "have proven not to work," as per Fox News.

According to Daily Mail, Mac's Public House on Lincoln Avenue was slapped with several violations for neglecting local, and state COVID-19 restrictions as officers from the New York City Sheriff's Department descended on the business.

Danny Presti's attorney Lou Gelormino said that Presti was issued three summonses while customers protested outside as a support for the local business. The bar was fined thousands of dollars as it continued serving indoors and operating past the 10 in the evening for restaurant service that Cuomo imposed citywide.

Outside the bar, a mural painted on the sidewalk declaring it an 'autonomous zone' and signs were plastered on the windows, as the owners claimed they are taking tips in exchange for booze after the establishment lost its liquor license.

Scott LoBaid posted on Twitter the footage from the scene showing dozens of the boar's patrons and supporters, and local business owners gathered outside the bar and shouting in outrage as Presti was led away.

Mac’s Public House is being raided by the Sheriff’s Dept in #StatenIsland !! F**k you @NYCMayor and @NYGovCuomo ! #nyc #news #politics pic.twitter.com/vRGHdg4xF6

Senator Andrew Lanza, who represents the 24th District, which encompasses most of the Staten Island, arrived on the scene and demanded officers to explain why they had arrested Presti.