Walmart to Pay Its US Workers $388 Million in Holiday Bonuses

Walmart will pay its U.S. workers cash bonuses over the holidays, but critics say the country's largest employer is not raising workers' pay enough amid coronavirus crisis. 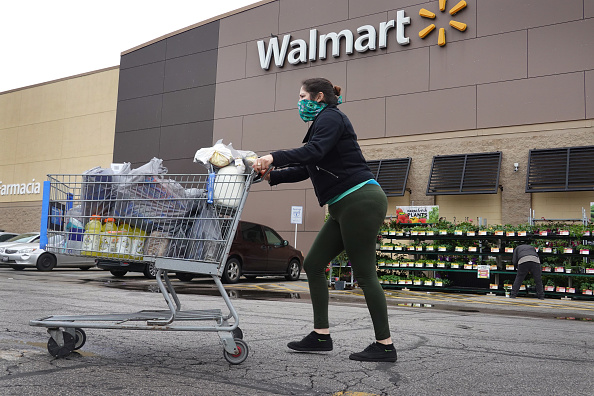 (Photo : Scott Olson/Getty Images)
Walmart Quarterly Revenue Surges 8.6 Percent During COVID-19 Pandemic CHICAGO, ILLINOIS - MAY 19: Customers shop at a Walmart store on May 19, 2020 in Chicago, Illinois. Walmart reported a 74% increase in U.S. online sales for the quarter that ended April 30, and a 10% increase in same store sales for the same period as the effects of the coronavirus helped to boost sales.

On Thursday, the company said it would pay out an estimated $388 million in one-time bonuses on December 24, CNN Business reported. The bonus includes $300 for full-time and $150 for part-time workers.

Around 1.5 million employees work in Walmart, with more than 60 percent of whom work full-time. The $388 worth of bonuses will be the retail giant's fourth round of incentives this year.

The firm said that it paid workers quarterly business performance bonuses the whole year, bringing a total of $2.8 billion.

The essential business and stores remain open throughout the COVID-19 pandemic, according to Walmart. This year, the company grew sales and profits, and its stock price rose to more than 25 percent.

Molly Kinder, a fellow at the think tank Brookings Institution, said: "While a one-time bonus recognizes the extreme sacrifices of frontline associates during the pandemic, it does not go far enough."

Walmart has a starting wage of $11 per hour, below several other competitors with a $15 hourly minimum wage.

Kinder, who is also an author of a report of last month's worker pay at top retailers amid the coronavirus pandemic, noted that Walmart's latest round of bonus to its employees accounts for less than 25 percent of the retail giant's profit increase earned last quarter compared to a year ago.

Kinder added that with the additional $388 million bonuses announced on Thursday, Walmart employees would earn an average of $0.71 per hour in extra pandemic pay until the end of the year.

Kinder said this is far less than the additional payment frontline workers will earn at many of Walmart's closest competitors.

According to CNN, Delia Garcia, Walmart spokesperson, did not directly respond to Kinder's calculations. However, Garcia said that Walmart associates are providing a vital service in communities across the U.S.

Meanwhile, Albertsons and others provided their workers with hazard pay during the pandemic's early months, but they have already ended. Last week, Amazon said it would pay holiday bonuses to its workers.

The COVID-19 pandemic intensified across the country. Over 100,000 individuals are in hospitals and got sick with the coronavirus.

Public health experts warned that hospitalizations and deaths could rise further in the aftermath of Thanksgiving and other gatherings wherein people celebrate indoors during the winter.

Dr. Robert Redfield, director of the Centers for Disease Control and Prevention, said on Wednesday that the next few months of the pandemic would be the most difficult time in the public health history of the country, according to CNBC.

The outbreaks in small towns and cities mean the grocery store workers face a higher risk to their health and their families' health when they work daily.

The United Food and Commercial Workers International Union, a significant grocery union, recently called for all grocery workers to get "hazard pay," a much higher hourly pay they should be compensated for the additional risk.

Since March, Walmart has hired more than half a million employees in its different stores, supply chain, and clubs. The retail giant said over 20 percent of those workers have moved into permanent positions. The hiring spree helped Walmart's keep up on the sales of merchandise, especially on its website.

Aside from the pandemic-related bonus to hourly workers, Walmart also extended its COVID-19 emergency leave policy until July next year as the country hit records for COVID-19 hospitalizations and deaths.