Coca-cola's heartwarming trailers are crowned as the best Christmas advertisements of 2020. 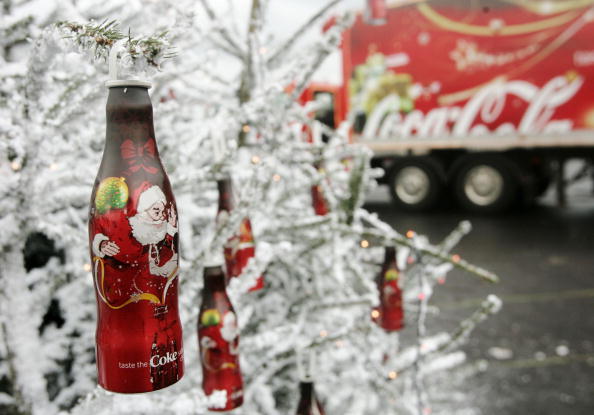 (Photo : Mark Renders/Getty Images)
Coca-Cola Christmas Trucks BRUSSELS, BELGIUM - DECEMBER 09: The Coca Cola logo is seen on trucks on December 9, 2006 in Brussels, Belgium. It is 75 years since Haddon Sundblom drew the Coca Cola Christmas man, and to celebrate Coca Cola Belgium has developed an aluminium bottle which the trucks will deliver exclusively throughout Luxembourg and Belgium.

The iconic "The Holidays are Coming" campaign of Coca-cola got first place and its new advertisement "The Letter" came in second.

In 1995, the Holidays were Coming advertisement first aired and has returned to screens this year, marking the start of the Christmas season for many people.
@YouTube

The drink giant scored top marks in four categories: most enjoyable, most powerful advertisement, the one which generated the most love, and the trailer with the most powerful branding.

Kantar carried out a survey that evaluates more than 3,000 U.K. consumers' opinion as they watched this years' presentations through artificial intelligence to identify emotions, according to The Sun.

Coca-cola's carbonated commercials turned again to the iconic campaign, which was accompanied by a real-world truck tour where the company represents dispensed drinks to thirsty consumers, but this will not proceed this year for some reasons.

Besides, the drink giant cemented its place at the top as well as the second place with a Wieden + Kennedy produced spot directed by Taika Waititi, "The Letter," that seeks to take the brand in a new direction by highlighting an oil rig worker motivated to deliver a letter from his daughter to Father Christmas at any costs.

On the other hand, Disney+, Coca-Cola's closest competitor for the crown, harnesses the power of nostalgia to reap the rewards in the present, focusing on memories of the classic movies to give an appreciation of the newer films in' Make This Christmas Wonderful.'

The Drum reported that Lynne Deason, Kantar U.K.'s head of creative excellence, commented on Coca-cola's dominance, saying, "Getting it right this Christmas was always going to be tough, as brands and creative agencies tentatively walked the tone of voice tightrope."

Deason added that this year's Christmas advertisements show that there are many ways to make the Christmas advertising more effective. She explained that the top-performing ads use unique approaches, including escapism, humor, fantasy, and nostalgia.

Although not every ad expressed a lively scene, any attempt to reference COVID-19 will always be tricky, as per Deason. While some brands have triumphed, others have been misunderstood, although they were very well-intentioned.

Other ads chose to hit the sweet spot with humor

Advertisers have the choice if they will address COVID-19 in their message, or they will stick to more upbeat communications directly.

Tesco pulled a technique in which it embraced humor as an antidote to despair. The company aimed to significantly affect its 'No Naughty List 'that hit the funny bone to rank in the upper third place. The British ads brought an enjoyable, engaging, and provocative campaign this year.

Meanwhile, Amazon adopts a unique attack in 'The Show Must Go On,' which refuses to shy away from COVID-19. According to Kantar's research, Amazon's Christmas ad campaign was considered 50% appropriate to the viewers, but it was also found to be less effective by failing to integrate the brand properly.