Pelosi, Schumer Back Bipartisan $908B COVID-19 Relief Proposal as Starting Point for Talks 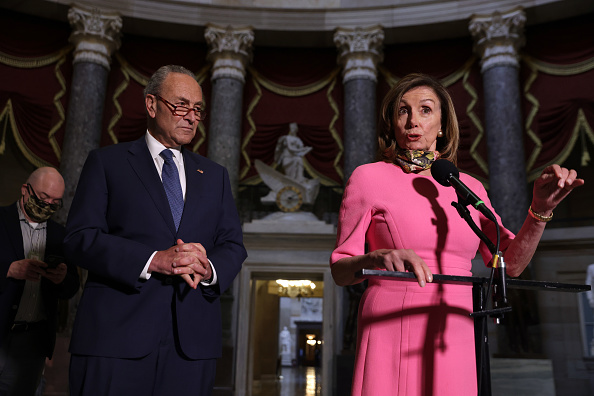 According to the Washington Post, Nancy Pelosi and Charles E. Schumer said in a statement that they believed that the bipartisan proposal framework proposed by the Senators should be used as the basis for bicameral negotiations.

Before Wednesday, the Republican and Democratic leaders squared off for several months insisting on bills the other party would not accept.

Pelosi's and Schumer's announcement on Wednesday seemed to be the first time that the party leaders approved to back the proposal that had substantial support from the members. Days before lawmakers set to break for the holidays and after the President-elect Joe Biden urged the Congress to pass "immediate relief," the move came.

The proposal with roughly $908 billion was introduced this week by the bipartisan group of House and Senate lawmakers. The relief proposal's price was still almost a trillion dollars, less than Pelosi and Democrats' urging for and more than what the Republican leaders are willing to sign off on.

The bipartisan relief proposal also provides $16 billion for vaccine distribution, testing and contact tracing, funnels, $45 billion for transportation, and $82 billion into education. It allocates as well as funds for rental assistance, broadband, and child care.

However, the proposal does not include direct payment to most Americans and would offer temporary federal protection from COVID-19 related lawsuits, even if Democrats strongly oppose a broad liability shield.

It's yet to verify if the proposal is ready for a vote on the Senate or House floor, or if Senate Majority Leader Mitch McConnell would commit to calling it up for a vote. In response to the bipartisan proposal, McConnell told the reporters on Tuesday, "We just don't have time to waste time."

Meanwhile, Senator Mitt Romney told reporters that the bipartisan group would conduct a virtual meeting later Wednesday to continue discussing the compromise bill's details. Romney reiterated that the group is aware of the limited time the lawmakers have to propose legislation.

Besides, he noted that he and the other members aim to stay in town to work and be available for negotiations through the weekend.

Some Republicans welcomed Pelosi and Schumer's support for the relief proposal. Senate Majority Whip John Thune said, "That's definitely progress. It's a move in the right direction and I think hopefully it'll be helpful in us getting a deal done."