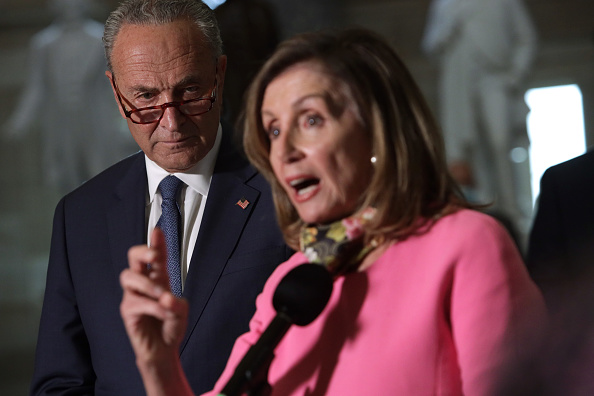 Top congressional Democrats are urging Mitch McConnell to meet at 'the table,' as COVID-19 cases in the U.S continue to spike. On November 17, Pelosi and Schumer asked the Kentucky Republican to join them at the table to negotiate and reach a deal for the stimulus package, as per Heavy.

In the joint letter, the top congressional Democrats emphasized that Congress's need to "act immediately" is citing the country's increasing COVID-19 cases and devastating economic turmoil.

Pelosi and Schumer wrote, "We write to request that you join us at the negotiating table this week to work towards a bicameral, bipartisan COVID-19 relief agreement to crush the virus and save American lives."

Read also: Without Stimulus Money, These Essential Programs Will Evaporate

Talks regarding the stimulus package have yet reached an impasse as lawmakers continue discussing the next stimulus bill's total cost.

Pelosi and the White House discussed a stimulus package between $1.8 trillion and $2.2 trillion. However, the talks were dismissed due to the November 3 election, as per Business Insider.

Now, McConnell leads up an effort for a smaller, Senate-backed stimulus proposal as the administration stepped back from negotiations.

Pelosi and the minority leader called on McConnell to think again about his targeted approach in a letter.

"Earlier this year during negotiations with Chief of Staff Meadows and Secretary Mnuchin, we agreed to compromise on a stimulus package and lowered our request by $1.2 trillion. Since that time, you have lowered your proposal from $1 trillion to $500 billion, even if the consensus from experts and economists that the country requires a much larger injection of aid," they said.

The Democrats claim that bigger relief aid is needed for small businesses, schools, and individuals where the coronavirus has torn through communities and left many stranded and helpless. The pair also cited government and hospitals funding for frontline workers to distribute vaccines.

Schumer and Pelosi stated that they are asking McConnell to come to the table and work with them to make an agreement that will meet the country's needs in this crucial time for the sake of America.

McConnell reiterated his stance that Democrats blame the stimulus delay following Pelosi and Schumer's urge for further talks with McConnell. According to Newsweek via MSN, the Democrats sent a letter to McConnell on Tuesday to negotiate with him this week to facilitate a bipartisan COVID-19 relief bill amid the pandemic.

The Senate Majority Leader indicated after he received the letter that he remains on his stance that a "targeted stimulus package" must pass, blaming Democrats for the rejected prospect of slimmed-down relief measures. McConnell took to his Twitter and said, "For weeks, Republicans have tried to pass another targeted relief package. It would send hundreds of billions of dollars to unemployment aid, schools, another round of the job-saving PPP, and healthcare."