President-elect Joe Biden pushes the Democratic leaders to reach a stimulus deal with Senate Republicans, even though it is a smaller bill than the Democrat's HEROES Act.

The top congressional Democrats urge Senate Majority Leader Mitch McConnell to start stimulus discussions amid the skyrocket of COVID-19 cases in the U.S. 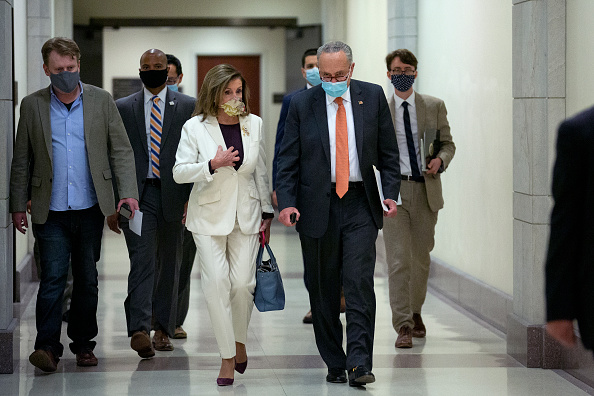 On November 17, Senate Minority Leader Chuck Schumer and House Speaker Nancy Pelosi asked McConnell to join them at 'the table' to reach a deal for the next round of COVID-19 relief. In a joint letter, Pelosi and Schumer emphasized Congress's need to act, citing the country's devastating economic turmoil and climbing COVID-19 cases.

According to a late-October story in the Chicago Tribune, the relief talks have reached an impasse again as lawmakers continue to argue over the next stimulus bill's cost. Republicans urge for employer liability protections, while Democrats are seeking substantial local and state government funding.

HEAVY reported that Pelosi and the White House had discussed a package between $1.8 trillion and $2.2 trillion. However, talks were dismissed before the November 3 election.

Biden pushes for an 'immediate' stimulus deal even if it means that Democrats would agree with McConnell's offer of a $500 billion relief package, as per The Sun.

On Sunday, Jen Psaki, a Biden transition aid, told the New York Times that there is a need for emergency assistance and aid during the lame-duck session to assist small businesses and families. "There's no more room for delay, and we need to move forward as quickly as possible," Psaki added.

Both Schumer and Amy Klobuchar are optimistic about the second round of stimulus checks to agree soon if lawmakers would reach a 'breakthrough' in talks between the Democrats and GOP members.

Klobuchar told local news Kare 11 that she thinks the talks should be done in the next few weeks. I don't think we should go home at the end of the year without getting it done. I don't plan it," she added.

Last week Schumer confirmed that McConnell agreed to start another stimulus negotiation, saying that the GOP is 'eager for a deal' and he wants a stimulus bill as soon as possible.

On Thursday, House Minority Leader Kevin McCarthy criticized the 80-year-old politician during a press conference because many people have been banking in the hope of the second stimulus checks.

Millions of unemployed Americans depend on COVID-19 relief made under the CARES Act, which includes larger stimulus checks, as per CNET.

Schumer and Pelosi said that those at risk of losing their benefits would lead to eviction and hunger, and their leaders' action is needed.

Democrats and Republicans negotiate a $2 trillion stimulus package that includes unemployment benefits, small business aid, local and state funding, and $1,200 stimulus checks. The President-elect said he thinks the public wants politicians to cooperate and urged both parties to work together.

The primary problems that hinder the agreement have to do with money allocated toward local and state government, education funding, COVID-19 testing, and unemployment benefits. All of the essential programs in the CARES Act will expire on December 31, 2020.