The rising stress levels deepen among child-free co-workers toward working moms who need to take time for child care and schooling. 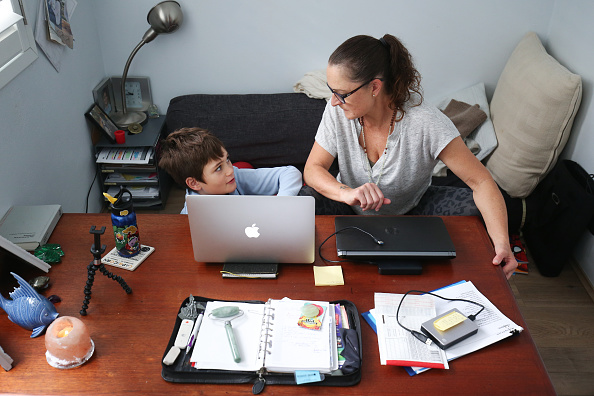 (Photo : Brendon Thorne/Getty Images)
Sydney Mother Balances Work And Home Schooling During Coronavirus Lockdown SYDNEY, AUSTRALIA - APRIL 09: Donna Eddy helps her son Phoenix with school work at their home on April 09, 2020 in Sydney, Australia. Massage therapist and acupuncturist Donna Eddy is able to continue running her business from home as a clinical practitioner after the Federal and State governments implemented tough restrictions and the closure of non-essential business due to COVID-19.

The NPR series surveys, labor statistics fact sheet, and McKinsey & Company indicate that women are losing paid work far higher than men. Some of it is due to retail majority-female frontlines, and hospitality is the hardest hit. However, mothers are fired or leave because it is not applicable to attend both their jobs and children.

Washington Post explained that this scenario doesn't mean fathers are not affected and do not step up. But it seems clear that women are disproportionately affected, and motherhood is a crucial contributing factor to the imbalance.

In the before times, gender-based labor inequality was a problem. But in the pandemic, parent-vs-children-free at work are becoming unmanageable, as per Post.

In the after times, long-term solutions are needed to remember the concerns and focus on resolving them as a society.

More moms are in the workforce than ever. "Women now make up half of all workers in the U.S., with nearly 4 in 10 homes having a working mom," according to the Center for American Progress.

Being a full-time mother as well as a full-time employee at the same time could lead to feelings of guilt and stress as the attention is divided between work and family. The key is to get organized, focus on a plan, and find the right balance between parenthood and profession.

On the other hand, HuffPost claims that single people with a mentality of "don't have a life" got a famous public sample in 2008. Janet Napolitano was nominated to be head of Homeland Security.

Through a CNN transcript, Ed Rendell, a former Pennsylvania governor, remarked on a live mic that Napolitano was the right choice as "you have to have no life. Janet has no family. Perfect. She can devote, literally, 19 to 20 hours a day to it."

Sometimes, being single and child-free while working means assumptions that if you rise the ranks, it is because your life outside of your profession is meaningless.

In an August HuffPost/YouGov internet pol, 503 U.S. adult women who work full time answered questions about whether being married or having children could lead to better treatment at work.

The poll showed 49% of the respondents said that women with or without kids have fair treatment, while 55% claim that married and unmarried women are equally treated.