Tesla (TSLA) has decided to cut the price of its base variants of the Model 3 sedan and Model Y sports utility vehicles. Interested buyers can now purchase the hot models for $1000 and $2000 cheaper, respectively. 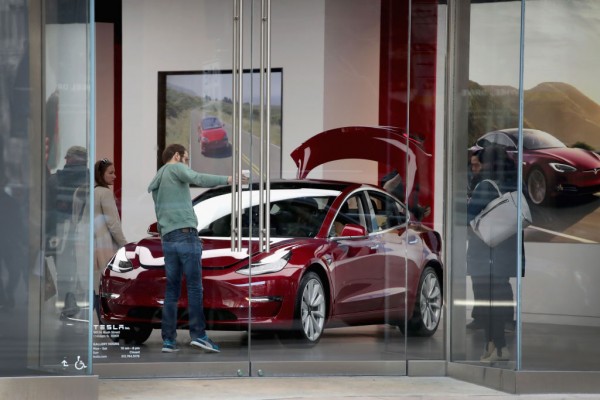 (Photo : Photo by Scott Olson/Getty Images)
MARCH 30: A Model 3 sits on the showroom floor at a Tesla dealership on March 30, 2018 in Chicago, Illinois. Tesla has announced it is recalling 123,000 of its Model S sedans due to a problem with power steering bolts.

Interested buyers of the performance variant of the two models, however, would not be too happy because both of them increased by $1000.

Tesla's price drops make monetary sense since it is facing greater competition down the road. Legacy automakers such as General Motors (GM), Ford (F), and Volkswagen (VWAGY) are already starting to look if they can penetrate the EV market.

Tesla hopes the price cuts will boost sales in Japan. Tesla's sales in Japan have been quite problematic. It sold less than 2,000 cars last year.

The competition in Japan can be described as steeper than everywhere else. Nissan's (NSANY) Ariya electric crossover SUV is slated to hit the Japanese market later this year already.

While price drops are happening, shares have also dropped. The two can also be connected.

Shares fell 1.35% to 787.38 on the stock market on February 18, pulling back from its 21-day exponential moving average. Tesla stock is testing its 50-day moving average, based on data provided by the MarketSmith chart analysis.

A bounce from that key benchmark can trigger a follow-on buy area for the IBD Leaderboard stock. But investors might be better off being patient and waiting to see if TSLA stock can retake its 21-day line.

Tesla stock flashed various signals of a climax top already back in January. It means that the stock has already peaked and might already be due to a pullback any time soon.

The stock has an RS Rating of 96 and an EPS Rating of 74, respectively. Its relative strength line has been on the lower trend since.

The company is hoping the price cuts can certainly lead to more sales or more deliveries. In 2020, the company delivered a record 499,550 vehicles.

Tesla is expanding its Shanghai manufacturing facility massively and is likely to put up an R&D center there year-end. The company also remarkably has more expansion plans, regardless of how the pandemic has slowed global economies down. The EV giant is building plants outside Berlin and Austin, Texas, and looking to have an electric-car manufacturing unit in southern India.