On January 25, the US movie theater chain AMC announced that it was able to raise a total of $917 million in funding, thereby avoiding calling a bankruptcy it deemed inevitable back in 2020.

The company started the process of raising funds fast back in mid-December as if felt like succumbing to the effects of the relentless COVID-19 pandemic, and it worked. 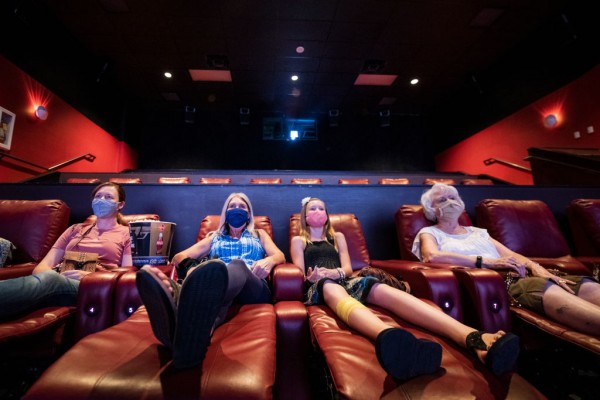 (Photo : Tom Cooper/Getty Images)
AMC Theatres Reopens Its Doors By Celebrating 100 Years Of Operations With "Movies In 2020 At 1920 Prices" DENVER, COLORADO - AUGUST 20: Movie goers watch a film at the AMC Highlands Ranch 24 on August 20, 2020 in Highlands Ranch, Colorado. AMC Theatres reopened more than 100 of its movie theaters across the United States today, with new safety precautions in place, for the first time since closing in March because of the coronavirus (COVID-19) pandemic. In celebration of its 100th anniversary, the world's largest theater chain is welcoming guests back with a "Movies in 2020 at 1920 Prices" promotion for one day by offering 15-cent tickets to classic and previously-released films and $5 concession items. Starting on August 21, older movies will be shown for $5 a ticket. According to AMC, enhanced cleaning and safety protocols include disinfecting theaters before each show, mandatory face coverings for employees and customers, upgraded air filtration systems where possible, and high-touch points cleaned throughout the day. Hand sanitizer and disinfectant wipes are available throughout the theaters, auditoriums are at 40 percent capacity or less, and concession menus have been simplified for shorter lines and quicker service. (

There is no denying that  one of the hardest hit industries by the coronavirus pandemic is the film industry. Theaters had to close down to give way to the pandemic measures and filmmakers cannot produce movies the way they use to. At the very least, moviegoers now enjoy their movies on their devices through streaming services. This trend can continue this 2021.

AMC announced that it had to do something drastic to remain afloat and that is to raise funds publicly.

"This increased liquidity should allow the company to make it through this dark coronavirus-impacted winter," the company said in a statement.

The company was able to attract many investors, who are quite optimistic about their possible ROIs. The shares soared by up to 39 percent on the New York Stock Exchange, and on January 2:15 PM (1915 GMT), the stock price was up at $4.57 (which is 30 percent higher).

The group so far was able to raise $406 million through a share sale as well as another $411 million in loans.

AMC was already able to raise over $1 billion in cash between April and November.  Funds were also raised through equity and debt.

The company is therefore relatively liquid today, and can be described as being saved by its proactive raising of funds, in the middle of a still ongoing crisis.

"This means that any talk of an imminent bankruptcy for AMC is completely off the table," said AMC CEO Adam Aron.

It can be recalled how the company was almost in panic levels back in October 2020, issuing warnings that it would run out of cash by the end of the year. They even said that even though there were a range of options that they could tap, none of them were perfect.

According to the Verge at the time, AMC Theaters had issued warnings to its investors that without a steady flow of movies that can push people to visit the remaining theaters it has open, the company would definitely go bankrupt by the end of 2020.

Based on some public documents, it was gleaned that the company was considering three options to staying afloat: continuing negotiations with landlords over lease payments of the theater locations, engaging in joint ventures with other more lucrative and liquid business partners, and selling off some assets.

"At the existing cash burn rate, [AMC] anticipates that existing cash resources would be largely depleted by the end of 2020 or early 2021." the public documents read.

AMC's chief financial officer, Sean Goodman even said at the time that even though all three options are exhausted, funds raised might not be enough to cover the losses.

THis new report of AMC avoiding bankruptcy is therefore a welcomed news.