Under the administration of the newest President, Joe Biden, efforts to change the $20 bill are said to be underway. In particular, there seems to be a push for Harriet Tubman to once again be the face of this bill. 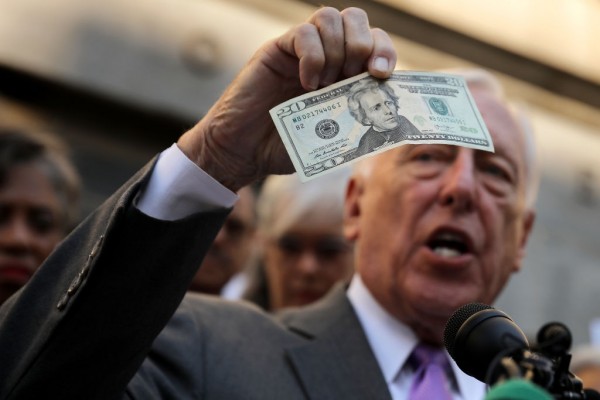 (Photo : Chip Somodevilla / Staff/ GETTY IMAGES)
House Democrats Urge Treasury Secretary Mnuchin To Place Abolitionist Harriet Tubman On New $20 Bill WASHINGTON, DC - JUNE 27: House Majority Leader Steny Hoyer (D-MD) holds up a $20 bill while rallying with House Democrats to demand that American abolitionist heroine Harriet Tubman's image be put on the currency outside the U.S. Treasury Department June 27, 2019 in Washington, DC. Treasury Secretary Steven Mnuchin told a Congressional committee in June that the Bureau of Engraving and Printing would not be able to meet the 2020 deadline for getting Tubman's image on the bill.

On January 25, Biden press secretary Jen Psaki said that the Treasury Department is already acting to restart efforts to put the 19th century abolitionist leader on the currency note, as reported by 6ABC.

It was still back in the Obama administration when Treasury Secretary Jack Lew had chosen Tubman to replace Andrew Jackson, the nation's seventh president, as the face of the $20 bill. But the decision has to be shelved because the then presidential-candidate Donald Trump has thrown shade at the decision.

Donald Trump, labelled the move "pure political correctness." When Trump eventually won, it was all but natural that the move did not prosper.

The then Treasury Secretary Steven Mnuchin did not move forward with the decision by the Obama administration and even decided not to do anything with the $20 bill at all.

Instead, Mnuchin in 2019 announced a delay in talks of redesigning the $20 bill in favor of changes in the $10 and $50 bills instead, in the bid to enhance security features to fight against counterfeiters.

There was no shortage of criticisms over this delay, as reported by the Guardian.

"During her life, Harriet Tubman fought to make the values enshrined in our constitution a reality for all Americans - and it is far past time that we recognize her place in history. The administration's decision to drag their feet and delay the redesign of the $20 until 2028 is unacceptable," said Representative Elijah Cummings, who, along with the Republican representative John Katko, were the ones to introduced legislation to require the treasury to put Tubman's picture on the $20.

Katko said he was "disappointed" with the outcome.

The unveiling of the redesigned $20 bill featuring Tubman, popular for her efforts in leading slaves to freedom on the Underground Railroad, was timed by the Obama administration to match the 100th anniversary of passage of the 19th Amendment.

This Amendment was groundbreaking - securing for women the rights to vote.

Some delays may have been caused by Trump's administration, but it might well be back underway today.
Psaki even told reporters during a briefing Monday that she and other officials were astounded to hear there were delays in the first place, given Tubman's contribution to society.

"It is important that our .... money reflect the history and diversity of our country and Harriet Tubman's image gracing the new $20 note would certainly reflect that," Psaki said. "We are exploring ways to speed up that effort."

Psaki said the details, including a new timeline for introducing a redesigned $20 with Tubman, would be unveiled when they are all finalized by the Treasury Department.

It would be easier now than it was in Trump's administration because Biden has chosen Janet Yellen to be his Treasury secretary, the first woman to take on this position in the department's 232 years of existence.