The Nashville bomber, Anthony Quinn Warner, was sued by his mom in a bitter dispute over an inheritance, a report revealed. 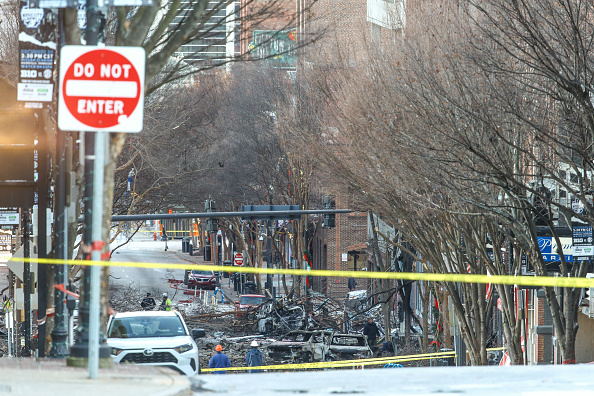 (Photo : Terry Wyatt/Getty Images)
"Intentional" Explosion Rattles Nashville On Christmas Day NASHVILLE, TENNESSEE - DECEMBER 25: Police close off an area damaged by an explosion on Christmas morning on December 25, 2020 in Nashville, Tennessee. A Hazardous Devices Unit was en route to check on a recreational vehicle which then exploded, extensively damaging some nearby buildings. According to reports, the police believe the explosion to be intentional, with at least 3 injured and human remains found in the vicinity of the explosion.

According to The Sun, Warner, 63 years old, planted a motorhome bomb and exploded in Nashville on Christmas Day. The explosion injured three people. The human remains were matched to the IT worker at the blast site, who is allegedly triggered by wild conspiracy theories regarding 5G technology.

The bombing emerged in recent years, discovering that Warner fell out with his mother over family property. The Nashville bomber's brother Steven died in 2018 without leaving a will, according to the court filing sought by the Daily Mail.

Steven, 62, owned a home he inherited from his father, Charles, who had divorced Anthony's and Steven's mother, Betty Lane before he died in 2011. Betty wanted the former family home to belong to her legally. The $250,000 property was allegedly fraudulently claimed by Anthony in a deed transfer a month before his brother's death.

The Nashville bomber gifted the property to a woman

Then, Anthony gave the property to Michelle Swing, a 29-year-old woman based in L.A., as a gift. Anthony and Michelle's relationship remains unclear, but Swing was not suspected of any wrongdoing.

This year, the dispute was resolved when Swing transferred the three-bed home back to the bomber's mother, who is living there today. In Betty's lawsuit, she accused Anthony of carrying out an "act of self-interest" when he transferred the house to himself, while a power of attorney was in effect.

The suit alleged that the Nashville bomber "violated his responsibility to act in the best interest of his brother." a judge ruled that Betty was the appropriate party to manage Steven's estate, according to a court hearing in February 2019.

On Sunday, The Sun revealed that Warner wrote to Swing, planning to "travel on Christmas Eve to spend a few weeks in the woods with his dogs." it emerged that the bomber gifted two properties to Swing on BAkertown Road in Nashville.

Betty praised Anthony as a "good man" despite their legal dispute. In an exclusive interview, Anthony's mother told The Sun, "I'm devastated and upset. I can't say any more."

Besides, police are reportedly probing if Warner's paranoia was triggered by the death of his dementia-ridden father, who worked for an AT&T subsidiary. The Daily Mail reported that the Nashville bomber was "heavily into conspiracy theories." It was believed that 5G was the "cause of all deaths in the region."

This year, baseless conspiracy theories emerged online regarding the ultra-fast 5G internet, including its tool to spy on people. The broadband network fueled the spread of COVID-19, another wild claim says.

Police have reportedly seized Warner's electronic devices from his home in Antioch, Nashville since he was named the bomber. : "We are waiting on the digital footprint that should finally provide us with some answers," the source told Daily Mail.

The insider added that the unofficial motive is that the suspect believed 5G was the root of the deaths in the region, and Anthony would be hailed a hero.

The report says that cops are investigating if the death of his father triggered warner. Charles Warner died of dementia in 2011, who was a former subsidiary of AT&T. In 2006, the AT&T subsidiary re-merged with the telecommunications giant.

Read also: Can Lorna Jane Activewear Protect You from Getting COVID-19? Court Says No!