2 Delta Passengers Slip Out of Plane via Emergency Slide

Two delta passengers used the emergency slide to slip out of the airplane from LaGuardia, the NY Post reported. 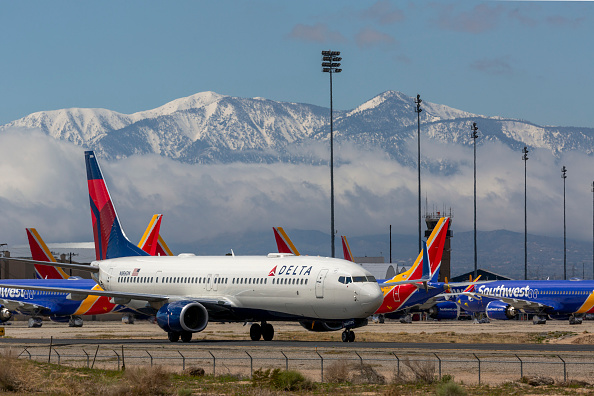 (Photo : David McNew/Getty Images)
Airlines Park Planes In Southern California Due To Coronavirus Slowdown VICTORVILLE, CA - MARCH 24: A Delta Air Lines jet taxis passes Southwest Airlines jets to be parked with a growing number of jets at Southern California Logistics Airport (SCLA) on March 24, 2020 in Victorville, California. As the coronavirus pandemic grows, exponentially increasing travel restrictions and the numbers of people in quarantine, airlines around the world are scrambling to find places to park a majority of their fleet as they wait to see how the situation will play out. (Photo by David McNew/Getty Images)

A man and a woman with a service dog jumped out of the airplane through an emergency slide Monday morning. According to the law enforcement sources and an airline spokesman, the cabin door was opened by the passengers, activated the slide, and took off as the flight bound to Atlanta, Ga., was flying out of the runway at around 10:55 AM.

The sources said that Antonio Murdock told the Port Authority cops that his post-traumatic disorder was triggered. Murdock and his female companion Brianna Greco, 23, were arrested in the incident.

Brian Plummer, who was also on Flight 462, spotted the pair and their pooch several times, seeing them changing seats as the plane prepared to depart, he told The New York Times.

The man shot up from his seat and told the flight attendant that he could not sit down due to his post-traumatic stress disorder. Murdock said if he sat down, he would freak out, as per Plummer.

Maintenance technicians have evaluated the aircraft

The passengers were charged with criminal trespass, disorderly conduct, reckless endangerment, and obstructing governmental administration, the source said. According to the NY Post, no one was injured in the incident.

The plane was supposedly scheduled to take off shortly before 10 AM, but it returned to the gate where the passengers put on other flights, the airline spokesman explained.

The airline spokesman added that maintenance technicians evaluated the aircraft, and it is set to return to service this evening.

According to Flightaware.com, the Delta 462 departed LaGuardia at past 7 PM, more than nine hours late. Further questions were referred by the airline to the Port Authority Police Department, which stated the police arrested one of the passengers and was charged with reckless endangerment.

The airline said that the pair forced open the cabin door on their Delta flight bound for Atlanta when they slipped the emergency slide before takeoff. The Airbus A321 was taxiing and returned to the gate while other passengers were placed on alternate flights.

According to NBC News, it is still not clear what caused the hasty exit. The New York and New Jersey police department at the port authority, which operates the airport, did not respond to a request to comment.

According to Brian Plummer, the Murdock stood up as the aircraft started moving. He ignored the flight attendant's order to sit down, as per Plummer. He did not see the man open the cabin door, but the crew alerted the passengers after the plane came to an immediate halt, Plummer told The Times.

The couple left with their dog after Murdock had forced open the emergency exit, the NY Times reported.