Members of the "Squad" in the House introduced their bill to send $2,000 stimulus checks to Americans on Thursday. 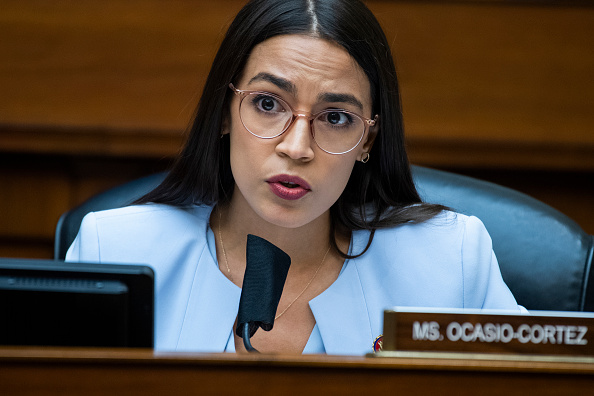 (Photo : Tom Williams-Pool/Getty Images)
Postmaster General To Testify To House Committee About Department's Ability To Handle Mail In Voting WASHINGTON, DC - AUGUST 24: Rep. Alexandria Ocasio-Cortez (D-NY) questions Postmaster General Louis DeJoy during a hearing before the House Oversight and Reform Committee on August 24, 2020 in Washington, DC. The committee is holding a hearing on "Protecting the Timely Delivery of Mail, Medicine, and Mail-in Ballots."

After the House Speaker Nancy Pelosi said the House would meet Monday to vote on stand-alone legislation for $2,000 stimulus checks, the bill was introduced.

The bill is different from the separate bill introduced by Representative Richard Neal, D-Mass., that aims to do the same thing. But Neal's bill changes the numbers on the COVID-19 stimulus bill to $2,000 instead of $600. It would also be effective if the stimulus and the government funding package is signed into law.

However, the "Squad" bill is independent of the rest of the stimulus. It directly amends the Internal Revenue code's wording because it currently stands after Congress's relief bill passed earlier this year. Therefore, the "Squad" bill could be enacted on its own.

Republicans in the upper chamber were on a different page than the president throughout the COVID-19 relief efforts and had opposed the $2,000 checks. Senator Roy Blunt R-Mo said that he would be surprised if lawmakers end with a deal with a Democrat to push for $2,000 stimulus checks.

On Monday, Democrats will vote on a bigger stimulus check and vote to override Trump'sNational Defense Authorization Act veto. Meanwhile, the House Republicans blocked a Democratic effort in providing the $2,000 checks on the floor.

A GOP to address the other part of Trump's twofold objections to the government spending package - foreign aid was also blocked by the Democrats. Kevin McCarthy, R-Calif., House Minority Leader, accused Democrats of having a "selective hearing" to address the checks and not the foreign aid.

The government became at risk of shutting down after Trump decided not to sign the massive COVID-19 stimulus and government spending package that lawmakers sent to him.

"Congress is expected to vote on the second largest bill in US history *today* - $2.5 trillion - and as of about 1pm, members don't even have the legislative text of it yet," she said tweeted.

Democrats are wary of the stimulus package

The Sun reported that the progressive Democrats representatives proposed their own bill on Christmas Eve as they are wary that the stimulus package's language will not amend to give Americans $2,000 stimulus checks over the previously approved $600 stimulus payment.

President-elect Joe Biden is set to take office on January 20. As Trump demanded an immense amount of stimulus checks, Biden indicated that he would support a third round of stimulus checks for Americans once he is in office.

Read also: Second Stimulus Checks: These People Might Get More Money Than You!