Boston Dynamics robots seen in the viral videos that freaked people out will be bought by the Korean-based Hyundai and said it is acquiring 80% of the Massachusetts-based company from Japan's SoftBank Group for $1.1 billion.

Hyundai plans to use robots in sophisticated services 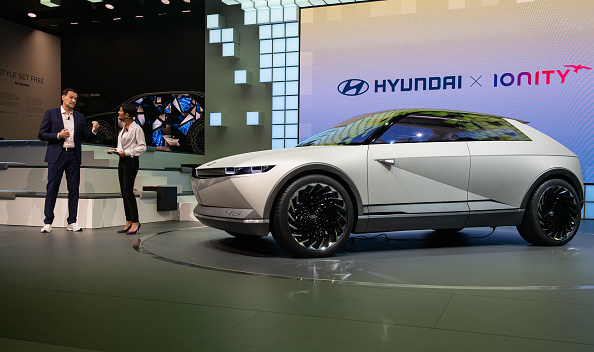 (Photo : Thomas Lohnes/Getty Images for Hyundai)
Hyundai At IAA 2019 FRANKFURT AM MAIN, GERMANY - SEPTEMBER 10: Thomas Schemera, Executive Vice President and Head of Hyundai Motor Group's Product Division speaks at the unveiling of '45' an electric vehicle concept at the 2019 IAA Frankfurt Auto Show at Messe Frankfurt on September 10, 2019 in Frankfurt am Main, Germany. The Frankfurt Auto Show is taking place during a turbulent period for the auto industry. Leading companies have been rocked by the self-inflicted diesel emissions scandal. At the same time the industry is on the verge of a new era as automakers commit themselves more and more to a future that will one day be dominated by electric cars.

According to Fast Company, Hyundai explained that the deal has to do with the company's vision of transforming "human life by combining world-leading robotics technologies with Hyundai's mobility expertise." The key technologies that the Boston Dynamics' robots possess, such as "navigation, perception, and intelligence," are the factors that convinced Hyundai to acquire the company.

Boston Dynamics' Spot is the company's current commercial robot that is a dog-shaped quadruped robot. The company positions as a piece of intelligent surveillance equipment in deploying more likely dangerous locales, including oil and gas fields and construction sites. It also designed Spot as the bot you need to inspect potentially hazardous packages from a distance.

However, Boston Dynamics has also bipedal robots that Hyundai says it expects to deploy in the service sector. Hyundai thinks that these humanoid robots will be used in the healthcare sectors as helpers for caretakers of disabled elderly, especially the bots Hyundai aims to develop "humanoid robots for sophisticated services like caregiving for patients at hospitals."

By June 2021, Hyundai expects to complete the deal, which SoftBank would retain a 20% share in Boston Dynamics through its affiliate. In the early '90s, from a team of researchers at the Massachusetts Institute of Technology, Boston Dynamics grew. In 2013, Google bought the company leading to a swath of Terminator comparisons prior to selling the robotic maker to SoftBank.

Battle in the innovation world

The stake came after Euisun Chung, the newly promoted Hyundai Motor Group chairman, pledged to reduce reliance on traditional vehicle manufacturing and said robotics would account for 20% of its future business car-making, taking 50%, then by urban air mobility with 30%. Chung will own 20% stake in Boston Dynamics, while Hyundai's affiliates, Hyundai Glovis and Hyundai Movis, will hold a combined 60% stake.

Last Year, Ford Motor revealed it was partnering with Agility Robotics, the walking robot maker, and plans a fleet of self-driving delivery vans to deliver packages to people's homes. The deal was pulled back by SoftBank as CEO Masayoshi Son decided to focus on investing, as per CNBC.

Cha Doo-won, a mobility consultant, said, "Automakers are in an innovation race. Hyundai is a late-comer to the race, and it seems that they want to showcase that they can do it, rather than trying to generate money from the robot business."

Hyundai developed a wearable robot to decrease factory workers' fatigue and run pilot programs for its U.S. plants. The company announced in January that it partnered with Uber in developing electric air taxis. However, the U.S. firm said it would sell its loss-making flying taxi to an electric passenger aircraft developer, Joby Aviation.
@YouTube