The COVID-19 relief negotiation is again stuck with Democrats and Republicans divided on a possible deal's scope and size.

McConnell sees no possible path to an agreement 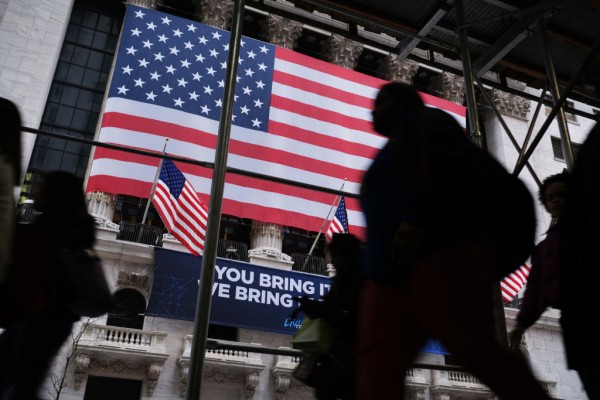 (Photo : Photo by Spencer Platt/Getty Images)
People walk past the New York Stock Exchange (NYSE) on February 12, 2020 in New York City. The market closed up over 250 points as gains in tech companies and retailers outweighed concerns over the coronavirus.

On Thursday, the stimulus proposal hit an impasse after appearing to be near to reaching a deal. Republican Senate Majority Leader Mitch McConnell's office told staff on Wednesday for the other three congressional leaders that he cited no potential path to the agreement on local and state relief aid and liability protections, as per a senior Democrat who knew the conversations.

On the other hand, Democrats claim that McConnell's proposal won't work as the state's aid is crucial in funding the COVID-19 vaccine distribution, according to Yahoo News.

According to two sources familiar with the discussions, the group reached an agreement on allocating $16 billion to local and state governments in a small sign of progress.

One person involved with the coronavirus relief negotiations described the status as "stuck." The group talks to the Chamber of Commerce and Business Roundtable and plans to talk again on Thursday afternoon, as per two sources.

McConnell's sign-off is needed to get a Senate vote on any bill. Talks are focused on the length and scope of the liability protections, one senior Republican staffer said. At the same time, Democrats urge states to have more flexibility than establishing a federal standard.

White House and legislators continued their efforts to end the new COVID-19 relief plan, as Americans lost their jobs amid the pandemic. NPR reported that the COVID-19 Tracking Project reported 3,054 COVID-related deaths, surpassing the number of Americans who died in terrorist attacks.

Besides, the project recorded over 106,000 Americans hospitalized with COVID-19, while medical facilities nationwide announce they are running out of or will soon run out of beds.

Moreover, the Labor Department's announcement of slime in initial unemployment claims recorded 853,000 against the expected figure of 725,000. In nearly two months, it was the first time the number of weekly claims has exceeded 800,000, reflecting efforts by states and local governments in slowing the COVID-19 outbreak by implementing restrictions.

According to Yahoo via MSN, the federal government essentially abandoned Americans' direct assistance after passing the CARES Act in March. Nearly 12 million renters will owe approximately of $5,850 in back utilities and rent by January, Moody's Analytics projected. The federal eviction moratorium is near to expire and would leave millions at risk of losing their homes.

Several proposals are floating in Washington, DC, even if the most amount to less than $1 trillion and below what many experts suggest will be needed. A group of bipartisan senators led by Republican Mitt Romney of Utah and Democrat Joe Manchin of West Virginia is working on the details of the worth $900 billion agreement. The plan was set to include $300 weekly federal unemployment insurance for 16 weeks but doesn't include one-time stimulus checks.