A couple from Chicago canceled their dream wedding and decided to give back to those in need. 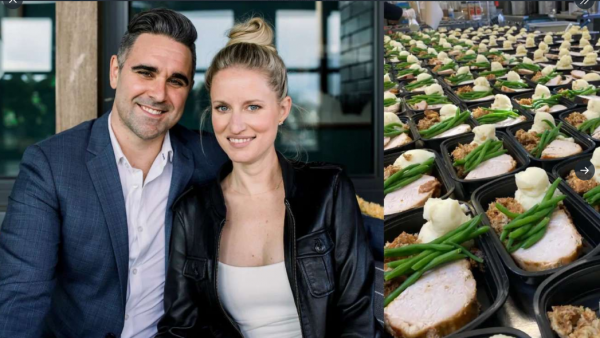 According to CNN, Emily Bugg and Billy Lewis planned to have a large wedding reception for their family and friends. However, as the pandemic gets worse, the Chicago couple realized their big day wouldn't happen the way they planned it. Last month, Bugg and Lewis got married in a small city hall ceremony with only a photographer.

The couple didn't have a venue, reception, or guests. But they had a $5,000 catering deposit. So the couple asked their caterer to turn the wedding food into donated Thanksgiving dinners for people in need.

Through cooperation, the catering company, as well as the newlywed served 200 meals to people with substance use conditions and those with mental illness.

In a statement, Bugg said, "In the grand scheme of things, canceling a massive wedding isn't the worst thing that could happen."

She added that they were happy to be married and help Thresholds' clients to feel the connection of Thanksgiving foods brought by their wedding cancellation.

Heidi Moorman Coudal, the owner of Big Delicious Planet, a Chicago-based catering company, remembered, "They said, 'Is there any way we could do something good with our deposit?'"

Coudal added that most couples ask to get their money back or think that the time and resources that caterers put into their wedding menu are another sunk cost.

She told CNN, "For them to think of doing something for the greater good is just heartwarming."

Thresholds is a nonprofit mental health provider in Chicago, and Bugg is an outreach worker. The organization helps people with conditions like schizophrenia, bipolar disorder, and major depression.

The community mental health center offered services last year to over 8,000 people, including the homeless, elderly, young kids, and veterans. Many of Thresholds' beneficiaries struggle with food insecurity and are low-income earners.

Mark Ishaug, Thresholds CEO, said that the donations are indeed needed as the nonprofit had to cancel its largest fundraiser due to the pandemic. Ishaug added that Thresholds usually host Thanksgiving meals for the people in need, but they had to cancel it amid the COVID-19 pandemic.

"This is about Emily and Billy, but it really exemplifies my entire staff and how much the people working at Thresholds care deeply about the people they serve," Ishaug said.

Also, the couple's deeds are an excellent example of creative generosity, inspiring others to give back to the community as well, as per Ishaug.

Meanwhile, another Chicago resident reached out to Thresholds to say that his supposed-to-be retirement party was canceled and asked if he could donate the food deposit toward Christmas meals for those people in need.