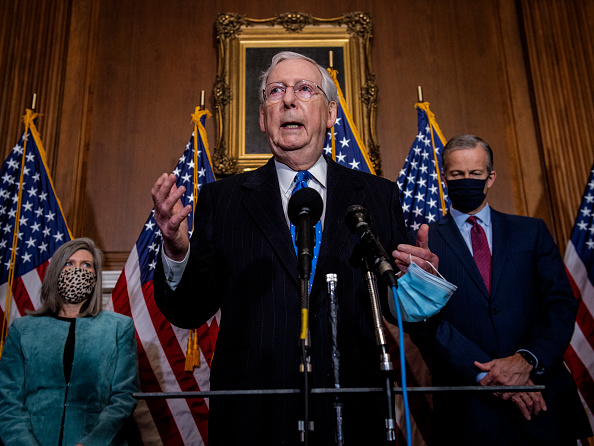 On Thursday, the Congressional leaders clashed over the next COVID-19 relief bill as McConnell suggested that lawmakers pass a smaller stimulus package with the provisions on both parties. Senate Minority Leader Chuck Schumer (D-N.Y) called on the Republican leader to start talks based on the new $908 billion frameworks proposed by a bipartisan group of lawmakers earlier this week.

When he spoke on the Senate floor on Thursday, McConnell said that the deal in the next federal aid bill is within reach. However, referring to two Senate filibusters earlier this year, McConnell criticized Democrats for "block[ing] policies they do not even oppose," according to Forbes.

Earlier this year, Democrats prevented the passage of a $500 billion targeted relief bill as they believed it to be insufficient to meet most Americans' needs during the pandemic. Meanwhile, McConnell put forward a more likely same targeted proposal and refused to endorse the new $908 billion bipartisan frameworks.

Along with House Speaker Nancy Pelosi (D-Calif.), Schumer signaled that the $908 billion relief plan would be a good start for negotiations saying in his remarks that McConnell "doesn't seem to compromise."

Pelosi and Schumer cited an immediate need to act. That's why they supported the $908 billion stimulus plan, even if they noted that they want to suggest some changes to the framework, as per a statement Wednesday.

The bipartisan plan includes $45 billion for transportation, $25 billion for rental assistance, $35 billion for healthcare, $160 billion in state and local aid, another $288 billion for small businesses, and $300 weekly federal unemployment benefits, even if more than a third of the total price tag would be made of newly appropriated money.

The lawmakers are contesting the rapidly approaching federal budget deadline. It should pass either a short-term continuing resolution or an omnibus spending bill before December 11 to avoid a government shutdown.

The COVID-19 relief compromise might have a spending bill, but there's no conclusion yet that lawmakers implement those all together in time.

Newsweek via MSN reported that President Donald Trump supports the Senate Majority Leader Mitch McConnell's opinion with the fresh bipartisan proposal worth $908 billion for the next stimulus bill. McConnell said the proposal should focus on the needs to be placed that the president will sign and alluded to the commander-in-chief.

Meanwhile, on Wednesday, Treasury Secretary Steve Mnuchin said that the president would sign off McConnell's proposals. After the president suggested Election Day that he would support higher spending than what the Democrats pitched in their updated HEROES Act, the president's apparent support for a reduced stimulus package came.

Read also: Stimulus Check: Here's When It Can- and Can't- Be Taken From You