5 Common Mistakes to Avoid When Buying a Car

When choosing a car, most people look first at the price and not at the financing terms. 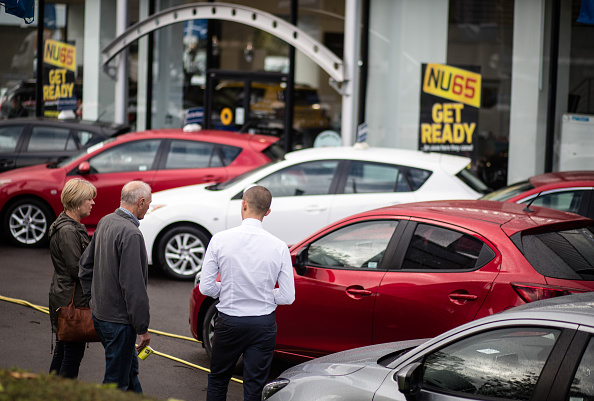 (Photo : Matt Cardy/Getty Images)
UK Car Sales Up 8.6 Per Cent Year on Year BRISTOL, ENGLAND - OCTOBER 06: A couple look at a brand new Mazda car that is offered for sale on the forecourt of a main motor car dealer in Brislington on October 6, 2015 in Bristol, England. Latest data from the Society of Motor Manufacturers and Traders (SMMT) show a record 462,517 new cars were registered in the UK last month, a 8.6% year on year increase, and that total sales in the year to date have hit 2,096,886, 7.1 percent higher than the same point last year and the first time the two million mark has been passed in September since 2004. The figures also showed a slight drop in the levels of drivers choosing diesel-engined cars, claimed in part to be due to the scandal that has surrounded Volkswagen and the disclosure that they cheated emissions tests on their diesel cars.

Money Under 30 had a survey with people and their experiences in buying cars. Out of more than 50 respondents, the majority shared common fears. Here is a sample:

Out of several instances of being screwed on buying a vehicle, here are the five most common mistakes you should be aware of and avoid when buying a car that you plan to use for a long time, according to Money Under 30:

Focusing too much on price

The price you will pay is only one of the elements of buying a new car. Although it is a significant reason for the argument, you should also learn if you paid more or less than the average person for that particular car. Mostly, the price is vital to answer if the car you will purchase will fit your needs.

Having an endless discussion against a car salesman is nonsense and financing a car with no down payment for four years at the cost of over $2,000. A smart buyer will attempt to dicker the dealer down from the MSRP or up from the invoice.

However, fewer buyers negotiate with interest rates. It's best to buy a car with cash unless you look at 0% or other low incentivized interest rates. If you have to borrow, do so conservatively and get the best rate that you can.

According to Yahoo, the average American spends ten hours choosing a car to buy compared to five shopping hours for a home loan. Even if everybody values time differently, spending ten hours buying car costs double the amount you've invested for the worth of your time.

Read also: Here's How You Could Refinance Your Rental or Investment Property

Underestimating the total cost of ownership

The average length of car ownership is 59 months, according to the USDOT's 2009 National Highway Travel Study. Instead of picturing yourself riding the car and traveling in different places, be prepared for the reality that you have to settle your balance first for several years. At the same time, you may also overestimate the gas you will save while underestimating toe costs like insurance, maintenance, and excise taxes.

We set our expectations too high.

The abundance of choice you have in an affluent society wrecks havoc on your happiness, Psychologist Barry Schwartz revealed. You might feel pressure with so many decisions that would make you anxious about the choice you made. The infrequency in which you buy and the adverse effect of the buying process, given your desired car's price, could put you to stress.

Schwartz jokes that the secret to happiness is lowering our expectations. But it's not entirely a joke.