Battle of the Billionaires: How Elon Musk Rocketed Behind Bezos

The U.S. Billionaires' wealth rose by over $1 trillion since the COVID-19 pandemic started in March, increasing more than a third, as per a new report. 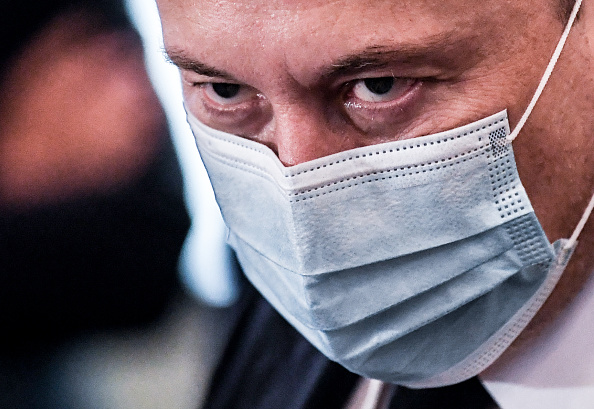 (Photo : Filip Singer-Pool/Getty Images)
Elon Musk In Germany BERLIN, GERMANY - SEPTEMBER 02: Tesla and SpaceX CEO Elon Musk (C) speaks with German Minister of Education and Research, Anja Karliczek during the CDU/CSU faction meeting the Westhafen Event & Convention Center on September 2, 2020 in Berlin, Germany. Germany. Musk is currently in Germany where he met with vaccine maker CureVac, with which Tesla has a cooperation to build devices for producing RNA vaccines, yesterday. Today, he is rumoured to also be visiting the site of the new Gigafactory under construction near Berlin.

According to Daily Mail, 650 billionaires gained $1.008 trillion in wealth between March and November this year and are worth a combined total of almost $4trillion, the analysis revealed. Among these groups, 29 billionaires doubled their wealth since March, and 36 new billionaires were added to the list.

Since mid-March, Amazon's Bezos has added an incredible $70.7 billion to his wealth, the Institute for Policy Studies (IPS) report revealed. Meanwhile, Elon Musk had the largest growth.

Musk's wealth grew to more than $100 billion since the COVID-19 pandemic began, from $24.6 billion in March to $126 billion in November. The boost in Musk's Tesla stock aided its market value and increased to 413%. Now, Elon Musk is more wealthy than Bill Gates, Microsoft founder.

Telegraph reported that the Amazon tycoon was the Earth's richest man before the health crisis, but Musk rocketed into second place as Tesla's share price surged.

The lockdowns strengthened Amazon's already unyielding grip, and its profits leaped in the three months ending in September.

Bezos was the first person to amass a net of $200 billion in history. Amazon employed 250,000 more workers and 100,000 temporary Christmas staff, while other companies reduced the workforce.

Sanchit Jain, an e-commerce expert at Enders Analysis, said, "Bezos and Amazon took the pandemic very seriously and didn't fall asleep at the wheel like others did."

With his number one ranking, Bezos is the only person that hinders Musk from becoming the world's richest person. However, it can change soon if Musk's wealth increase continues.

With more than $500 billion market cap, Tesla has been crowned as the most valuable auto company on Earth. Its market value exceeded Toyota, Daimler, General Motors, Volkswagen, and BMW combined, having boosted last week by Tesla's admission to the S&P 500 index.

All of that made Musk's "jaw-dropping" feat more impressive than the Amazon tycoon, according to Ives. Tesla will maintain a 60 to 70pc share of the electric vehicle market in the next decade, even if electrics expand from 3pc to 10pc of the overall sale, Ives predicts.

On the other hand, Besos has grown his net worth by 61% from $113 billion to $182.4 billion, but allegedly his employees do not receive hazard pay, and COVID-19 has infected thousands.

Daily Mail reported that Amazon defended its treatment of workers and told the Huffington Post that nothing is more important to them than their employees' health and safety.

It claimed that all staff was provided with masks, gloves, and on-site COVID-19 testing in several locations. Amazon reiterated that it pays employees at least $15 per hour.