Tesla's Elon Musk could have COVID-19, but people were more concerned about the accuracy that emerged around a new kind of rapid tests that start to be widely used. 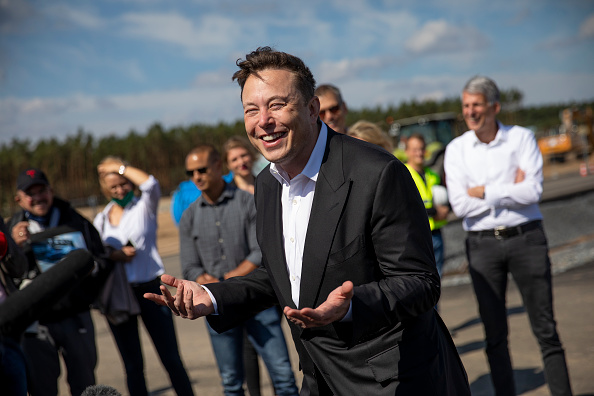 (Photo : Maja Hitij/Getty Images)
Elon Musk Visits Germany GRUENHEIDE, GERMANY - SEPTEMBER 03: Tesla head Elon Musk talks to the press as he arrives to to have a look at the construction site of the new Tesla Gigafactory near Berlin on September 03, 2020 near Gruenheide, Germany. Musk is currently in Germany where he met with vaccine maker CureVac on Tuesday, with which Tesla has a cooperation to build devices for producing RNA vaccines, as well as German Economy Minister Peter Altmaier yesterday.

On Friday, the controversy arose when Musk tweeted that he had been tested four times using Becton, Dickinson, and Co.'s COVID-19 rapid test, which gave Elon Musk two negative and two positive results. Last week, Musk traveled to Berlin on his private jet and said he had been experiencing cold-like symptoms, as per Fortune.

Experts who studied the rapid antigen tests had that early assessment that detected a protein on the surface of SARS-CoV-2. More information is needed, such as how and why the tests were performed on the Tesla CEO, experts cautioned.

Musk wrote, "Something extremely bogus is going on." he continued and suggested without evidence that such problems could account for the surge in coronavirus cases that has been building in America since September.

Rapid tests have become more widely used against COVID-19. It expands access to testing as they provide results instantly and at a cheaper cost. Besides, rapid tests don't need to be sent out to a laboratory and wait for several; days for its result. However, the test is less accurate than the swab test, gold-standard polymerase chain reaction tests.

The Tesla leader's contradictory rapid test result could mean that Musk is at the beginning of the end of the COVID-19 infection, with a barely detectable amount of virus in his system, said a microbiology professor at Johns Hopkins University, Andy Pekosz.

Pekosz is a co-author of a study that reported Becto Dickinsin's test was an excellent platform in detecting infected individuals, though the sample's size was small.

Suppose it's true that Elon Musk is at the beginning or end of COVID-19 infection. In that case, the situation could be the same as what happened at the White House, when President Donald Trump, other officials, and guests test positive with COVID-19 despite being screened with a rapid antigen by another manufacturer.

However, it could also mean that the assays used turned false positives for the CEO, which is known to occur with antigen tests. This can happen for several reasons, including when a test is improperly performed or when the test was used in populations with low virus prevalence, as warned by the U.S Food and Drug Administration (USFDA) earlier this month.

In a statement, Becton Dickinson said that many factors might lead to a discordant result. The company noted that they stated in the instructions for use that negative results should be considered in a COVID-19 patient's particular situation and confirmed with a molecular PCR assay if needed for patient management.

An unanswered question also sparked why Elon Musk received four rapid tests in one day. Unusually, someone who is not a celebrity businessman will accept that kind of treatment because the rapid tests are relatively short supply.