Doug McMillion, Walmart CEO, pushed for another stimulus package and congratulated Joe Biden on his election victory, as per CBS News. 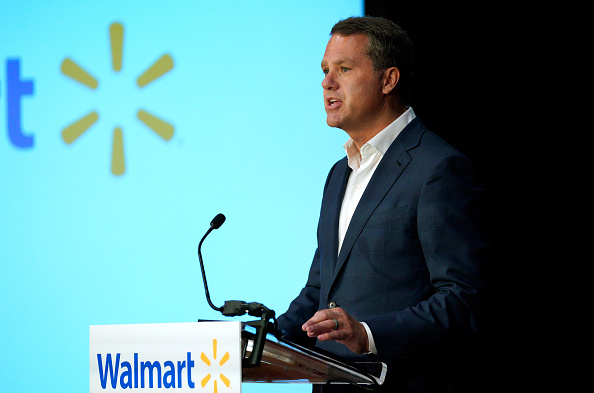 (Photo : Rick T. Wilking/Getty Images)
Walmart Holds Annual Multi-Day Shareholders Meeting In Arkansas ROGERS, AR - MAY 30: Doug McMillon, Walmart President and CEO speaks at the Walmart annual formal business and shareholders meeting on May 30, 2018 in Rogers, Arkansas. Walmart shareholders from around the world can attend meetings throughout the week.

Several news outlets called the race for Biden though votes are still not certified. During a phone call with investors. McMillon commented and said officials needed to work together to deliver help for small businesses that need to get through the next phase of the COVID-19 pandemic.

McMillion said, "We look forward to working with the administration and both houses of Congress to move the country forward and solve issues on behalf of our associates, customers, and other stakeholders."

According to Newsmax, Congress failed to pass the second COVID-19 relief bill. In May, the House Democrats passed a $3 trillion stimulus package.

However, Republicans balked at the price tag. Mitch McConnell, the Senate Majority Leader, dropped the figure to $500 billion as a "targeted" measure.

Meanwhile, Biden also called for another COVID-19 relief bill on Tuesday. Biden said that Congress should come together to pass a relief package similar to EHROEs Act that the House passed six months ago.

He explained that once the virus shut down and delivered another economic relief to businesses and workers, then America could start and build back better than before.

Business Insider reported that several CEOS had congratulated Joe Biden, while President Donal Trump has not conceded the election yet.

On November 6, Biden's victory was projected by Decision Desk HQ. According to the Associated Press, CEOS of over 24 Fortune 500 companies met virtually the same Friday to discuss what they would do if President Trump refused to concede.

McMillion, Walmart CEO, particularly highlighted the plight of small businesses that he explained would struggle to survive the coronavirus pandemic without another stimulus package. McMillion has urged Congress in recent months to pass another stimulus bill several times.

The lack of further stimulus has hurt companies of all sizes, including Walmart, while the executive has highlighted small businesses' battles.

On Tuesday, Walmart reported that its revenue reached $134.7 billion in the third quarter. The latest revenue report beat analysts' assumptions of $132.2 billion.

The United States comparable sales increased by 6.4% in the quarter, slightly softening, from 9.5% growth in the second quarter.

On Tuesday, Walmart reported that revenue reached $134.7 billion in the third quarter, beating analysts' expectations of $132.2 billion. US comparable sales increased 6.4% in the quarter, slightly softening from its 9.5% growth in the second quarter.

Neil Saunders, managing director of GlobalData, said that the end of expanded unemployment benefits contributed to the slight downtick in a note on Tuesday.

Unemployment benefits would likely be a part of a new stimulus package, as per Business Insider.

Read also: Without Stimulus Money, These Essential Programs Will Evaporate