Racing Pigeon Sells For a Whopping $1.9 Million at Auction

Seasoned breeding families were stunned following a Chinese buyer who bought a female pigeon for a whopping $1.9 milling at an auction. 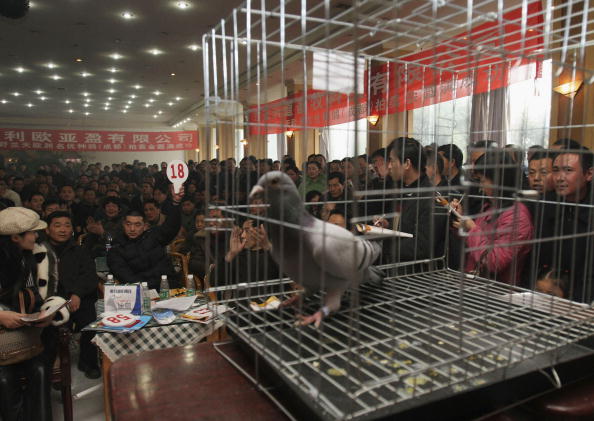 The best pigeon racing in the world is Belgian-bred pigeons. Still, breeding families were shaken after an anonymous Chineses buyer bought a female pigeon named New Kim at auction on Sunday.

During the two-week auction, bids on New Kim had reached $1.5 million, but the bidding war broke out at the last minute between the two Chinese bidders that led the bird to beat the all-time high price for a pigeon, as per the AP News.

According to Reuters, New Kim is a two-year-old pigeon retired from racing after being recognized as Belgium's best young pigeon. The pigeon was bred and owned by Gaston Van de Wouwer, a retired pigeon breed in Belgium, as per the AP News.

Pigeon racing was once one of the country's top interests and has faded in Belgium since the mid-twentieth century, Forbes reported.

The Belgian pigeon federation has 18,000 members, which dropped from the over 250,000 registered best pigeon breeders on earth and captured Chinese buyers' attention.

New opportunities for recreational spending in the country and pigeon racing were opened up as China's economy rose.

Pigeon racing emerged as a famous gambling sport with five-digit winnings, as per AP News. Before New Kim's sale on Sunday, the previous record was a male named Armando, also a Belgian pigeon who had almost $1.5 million last year.

It began as a working-class sport after World War One, as per Business Insider. Pigeons helped carry urgent messages and medication during the war. After the war, their races became people's leisure activity.

In recent years, the sport rose in popularity and prestige in China. Millions of money were spent by bidders for the pigeons, specifically from Belgium, where breeders specialize in pigeons for several generations. Pigeons' price pots could be in millions, Niels Cuelenaere, a project manager at Pipa, confirmed.

Besides, the birds have become something of a status symbol for people who rule the racing roost. In 2019, deputy general-secretary of the Beijing Changping District Racing Pigeons Association, Sun Yan, told CNN's Karoline Kan that China had been the "hottest" place for pigeon racing. There are about 100,000 pigeon breeders in Beijing along, as per Sun Yan.

Sun told CNN, "Beijing's pigeon races are the most professional ones in China." He added that if Europe is "the birthplace" of the modern iteration of sport, China becomes the hottest place for pigeons, with impressive money flowing in. "With money, nothing is impossible."

"Pigeon fanciers," in Chinese have around one million, and their numbers keep growing, said Cuelenaere. He cited the sport's appeal in China that its competitiveness and the opportunities it gives for gambling.