How to Prepare Your Business for Potential Election-Related Unrest

For months, anxiety has been mounting over the U.S. presidential election. Businesses feel the tense. Significantly earlier this year, conflicts arose from several social justice protests.

Aside from the protests, a contested election could spark widespread chaos, and businesses could suffer from hundreds of millions in damages, according to the INC.

Many business owners are starting to take precautions. From Washington to New York, and many other places in between, office buildings and retail stores are boarding up.

Businesses are taking caution, including luxury department stores such as Macy's, Nordstrom, Saks Fifth Avenue, and jeweler Tiffany & Co., as per the New York Times. 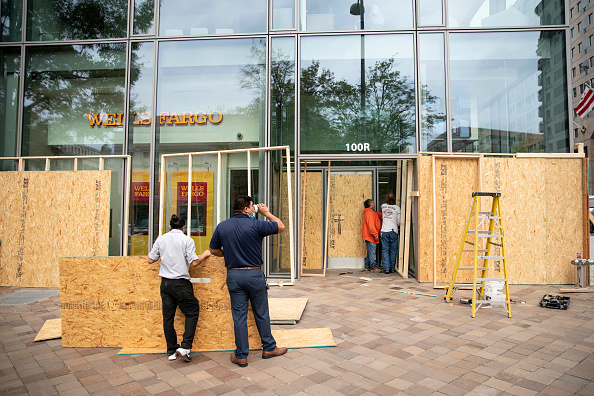 (Photo : Sarah Silbiger/Getty Images)
Businesses Around White House In D.C. Board Up In Anticipation Of Election Night Unrest WASHINGTON, DC - OCTOBER 28: Workers add protective wood boards to the glass walls of a Wells Fargo bank on October 28, 2020 near the White House in Washington, DC. Businesses are preparing for possible demonstrations following next week's presidential election.

Typically, physical damage to a business is insured by the BOPs or business owner policies. However, each claim varies, and providers may not cover everything. The Small Business Administration (SBA) offers help through low-interest loans for businesses damaged due to civil unrest.

Even if protests aren't violent, businesses could still be harmed. INC reported in July that following several nights of mostly peaceful demonstrations, it turned into a no-go zone, and business owners preemptively boarded up store doors and windows.

Regardless of the kinds of damages a business suffered, they can still apply for an SBA Economic Injury Disaster Loan (EIDL). This loan can be used for daily operating expenses, working capital, and in the case of civil unrest, to replace damaged properties.

EIDL is available in amounts of up to $2 million and comes with 30-year repayment terms. The interest rate of EIDL is as low as 3 percent.

Aside from EIDL, a separate SBA Disaster Assistance program called Business Physical Disaster Loans covers property damage. This loan is available depending on the location. You may check the SBA's official website to review appropriate sites.

USA Today reported that many retailers are already under stress during the COVID-19 pandemic. The uncertainty regarding potential post-election civil unrest also escalates the pressure on business owners.

After the business shutdowns began to lift in summer, stores often found themselves enforcing mask-wearing and limiting the number of shoppers to slow the spread of the virus.

They are also confronted with the possibility of unrest in the wake of the presidential election now that the holiday shopping season is withering.

The potential violence and damage to businesses worry retailers now that contested presidential election results are at risk of being delayed beyond the election day.

Will stores close or hours change based on the election result?

Several retailers temporarily curbed hours or closed some locations after the protests over Floyd's death. Several businesses closed due to their property damage, while others shut down as local curfews prompted by the protests.

After the summer protests, the plywood is still up for some major retailers, "but a casual walk around the downtown areas of some American cities suffices to businesses that don't turn their stores into fortresses," said Mauro Guillén, a political economist and author.

He added that companies should still prepare for the worst as their employees and clients deserve it.

Read also: How Could This Year's Shopping Season Be Different Among the Previous Years