Earthquake Aftershock? Nikkei Shares Now Above 30,000 After Over 30 Years

After Japan was wrecked with a powerful earthquake on Saturday, leading to an aftershock of devastating 9.0 magnitude quake that struck the same area almost a decade ago in 2011.

Nikkei share average shows no signs of tear. Instead, it rose in an unprecedented record. But analysts believe this could be shaky as it was the last time the share average touched above 30,000.

Nikkei Shares Back Above 30,000 After Earthquake 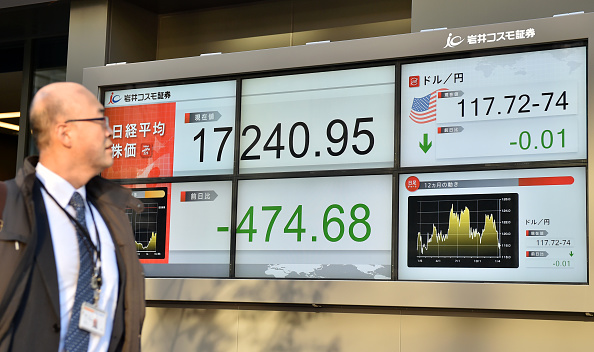 (Photo : KAZUHIRO NOGI/AFP/Getty Images)
A pedestrian looks at a share prices board showing the numbers on the Tokyo Stocks Exchange (L) and a foreign exchange rate board with the US dollar-yen rate (R) in Tokyo on January 14, 2016. The benchmark Nikkei 225 index at the Tokyo Stock Exchange tumbled 2.68 percent, or 474.68 points, to 17,240.95 at the close, after losing nearly four percent at one stage.

The 7.3 magnitude earthquake struck the country's east coast at 11:07 p.m. Saturday. At least 48 injuries were reported in Fukushima and Miyagi prefectures, but no major casualties. This is a miracle.

Another seeming miracle is how Japan's Nikkei share average rose above the 30,000 level for the first in over three decades on Monday. Decades of economic stagnation have led many to believe this day would not come. But it is now here.

The Nikkei's epic downfall even made Wall Street's worst bear market after the Great Depression look small. The DowJones Industrial Average took a total of 25 years just to recover, as reported by Yahoo Finance.

Not one of the Japanese banks that ranked highest among companies with the biggest market capitalization in 1990 are even existing now. They had either gone bankrupt or had engaged in mergers to stay afloat. Tokyo Electric Power Co, the biggest firm outside banks back then, ceased to be irrelevant and no longer worthy of investment after the 2011 Fukushima nuclear plant disaster.

But with their downfall emerged other companies who were able to ride the tide better. At present, the market is led by Toyota Motor, one of the country's last bastion of exporters. This is followed by MasayoshiSon's SoftBank Group, which was not even publicly listed 30 years ago. A slew of tech companies also lord over the market now.

Foreign ownership of Japanese shares has grown to almost 30% since then, which was just 4% in 1990. The turn of events was quite natural since domestic banks and companies have allowed cross-shareholdings.

The last time the Nikkei traded above 30,000 was Aug. 3, 1990. It was the fateful day after Iraq's surprise invasion of Kuwait. The political phenomenon made investors rethink their priorities and choices. They were anticipating peace after the Cold War in late 1989, but Iraq's action all but erased these hopes and their investing dreams.

Compared to the 1988-1990 period, most investors today believe the Nikkei's rise above 30,000 is not as frothy. The market is now trading at about 17 times expected earnings, which is higher than in recent years but not at the 1990 level.

Still, some players refuse to deny there are similarities in the market then and now.

"Somehow, there is a similar feel now. At the time we had acrazy bubble and the Bank of Japan did a monetary easing in ascale that had been previously unthinkable," Hiroaki Hayashi, managing director at Fukoku Capital Management, explained.

"Then we had the collapse of the Soviet Union and the worldentered a new era. Now, we have the bitcoin and GAFA sharessoaring while fiscal policies around seem unsustainable. The world order is looking shaky too, as evident in the changing U.S.-China relations," he added.