Uber's stock dropped by more than 3% after the bell on Wednesday as the ride-hailing and sharing company delivered mixed fourth-quarter earnings results. The business was undoubtedly affected by the COVID-19 pandemic but it can also be described as slowly recovering. 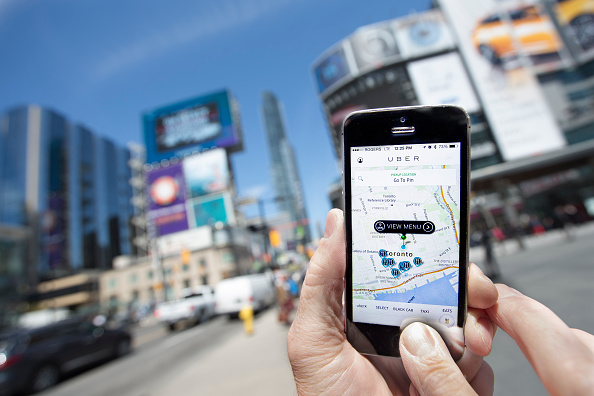 (Photo : Bernard Weil/Toronto Star via Getty Images)
TORONTO, ON - MAY 14 -Photographed at Dundas Square, Toronto, Uber taxi service is a new alternative way to traditional taxi to travel around the city. Request and payment are all made using an app.

At present however, the company is still losing about $1 billion a quarter on a GAAP basis.

One way to describe how Uber did against expectations is that "it could have been worse." The company made a loss of 54 cents per share, which is quite lower than the exected 56 cents loss per share. This is based on the data gathered from analysts surveyed by Refinitiv. On the other hand, it made $3.17 billion in revenue versus $3.58 billion expected per Refinitiv.

Overall, Uber lost $968 million on a GAAP basis during the quarter. While the loss is not a joke, it is actually an improvement from a year ago when losses reached as high as $1.1 billion, as reported by CNBC.

The same mixed results can be seen in how Uber's largest business segments performed in the fourth quarter of 2020. Mobility or gross books is down 50% from a year ago at $6.79 billion. On the other hand, Delivery (gross bookings) amounted to $10.05 billion, which is 130% higher from a year ago.

Even though delivery is apparently way ahead in gross bookings, the revenue Uber's core ride-hailing business is noticeably higher than  delivery for the first time since the coronavirus pandemic broke out.

According to CEO Dara Khosrowshahi, Uber still sees "many many opportunities" in the mobility segment as one region after another recovers from the pandemic. A full-blown recovery is harder to say, for its mobility business, since the pandemic is quite unpredictable. Recovery is highly dependent on when cities open up again, he explained.

In August 2020, Uber acquired a marketplace tech company, Autocab, that links riders with local taxi operators. Khosrowshahi suggested that as travel and commuting starts to increase once more, taxis can certainly tap into the higher demand and Uber can benefit.

The CEO however, is worried that Uber might not have enough drivers to meet the anticipated increase in demand in the mobility segment as the pandemic gradually wanes.

Earlier this February, the company announced some plans to acquire on-demand alcohol delivery app Drizly. Reportedly, Uber will be incorporating or integrating Drizly Uber Eats, its food-delivery service. The official statement of the company has it that the deal was valued at $1.1 billion in stock and cash combined.

During the pandemic, there is no denying that Uber has relied on Uber Eats to stay afloat.

The food delivery segment saw revenue increase 224% to $1.4 billion in the fourth quarter compared to the year prior because families can no longer eat out while the pandemic rages.