President Joe Biden confessed that it is highly unlikely that he will be able to make the minimum wage to $15 an hour. Many are banking on him doing so through his $1.9 trillion COVID-19 relief proposal, but Senate's rules served as a crucial impediment. 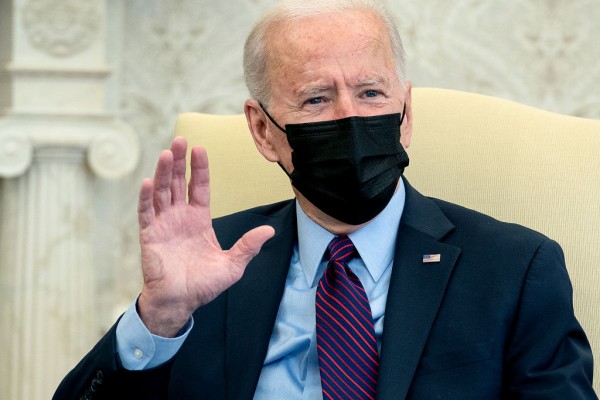 (Photo : Stefani Reynolds-Pool/Getty Images)
WASHINGTON, DC - FEBRUARY 05: U.S. President Joe Biden talks with House Democratic leaders and committee chairs to discuss the coronavirus relief legislation in the Oval Office at the White House February 5, 2021 in Washington, DC. In an effort to generate bipartisan support for his legislation, Biden met earlier in the week with Republican and Democratic senators to discuss his administration’s $1.9 trillion COVID-19 relief plan.

"I put it in, but I don't think it's going to survive," Biden told "CBS Evening News with Norah O'Donnell" (via CNN) in excerpts of an interview that aired Friday.

This interview with CBS is his first for network television ever since taking on the Presidency.

The whole interview will air on Sunday.

The President, who campaigned on raising the minimum wage to $15 an hour, is likely to cause some massive disappointment with this admission.

He once highlighted how important it is for workers to work at least $15 an hour. He even said he is prepared "on a separate negotiation on minimum wage, to work my way up."

The good news is that the relief package might well be underway after all the specifics are sorted out.

Both chambers of Congress on Friday passed a budget resolution that makes it possible Democrats to be carry out a process known as "budget reconciliation" so that Biden's sweeping Covid-19 relief bill can be passed already, even if just on a party-line vote.

Biden has said he is prime to go forward without the support of Republicans just so the relief package can be set out and given already. He, however, said he's not averse to making particular concessions if it means having bipartisan support.

Even though the Democrats and the Republicans cannot see eye to eye on many things, including how to proceed with COVID-19 relief, the new President said he would rather see the two parties compromsing.

A bipartisan deal is his preference, the President has said, but he also emphasized the urgency of the matter so that further delays out of disagreements must be avoided.

He emphasized the need to pass immediate and substantial relief to address the pandemic that is unrelenting in ruining the US economy and the world's, apart from making people sick.

The President's $1.9 trillion Covid-19 relief proposal to Congress covers $1,400 stimulus checks and more aid for those who lost their jobs, the hungry and those facing homelessness because the pandemic.

The plan also covers increased funding for vaccinations and testing, and more aid for the hard-hit small businesses, as well as states and local governments that saw its own budgets draining.

Democratic lawmakers have rallied for years to raise the minimum wage, but it has not been increased since 2009. As it stands now, the minumum wage is only at $7.25 per hour.