Can You Spend $1 Million in 60 Seconds? MrBeast Tests Fans in Viral Video

Being a millionaire is one of the many dreams of every individual in the world. But, do you imagine having a million dollars for only a span of one minute?

Jimmy Donaldson, also known as MrBeast, an American Youtuber, gamer, and philanthrophy, created a viral video titled, "I Gave People $1,000,000, But only 1 minute to Spend it," to know how people reacts to $1 million, and how they'll spend it.

How will you spend $1 million? 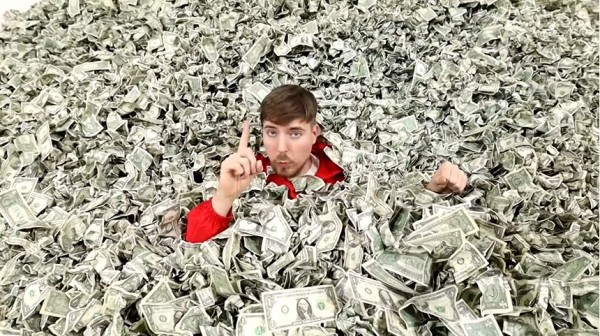 If you're given a chance to be a millionaire in a minute, what's the first thing you will buy?

Before the year ends, MrBeast had a Youtube video that went viral in December. He and his friends invited few fans and relatives to be a millionaire for only a minute.

In about 60 seconds, all players will have the ability to buy anything they want until it reaches a million.

On the first player, MrBeast invited a man named Carl to shop several items in an appliance store. He gave him one million to spend for only 60 seconds, all items that will be inside his cart will be given to him for free.

Shockingly, MrBeast also made a running track to one player which needs to run fast in under one minute in order to get to his chosen car.

The farthest vehicle in the field is the most expensive, while the closest is the cheapest of them all. Interestingly, he chose Tesla, worth over $40,000, as his car.

How much do Americans spend in a day?

Though having a million dollars is surely a dream to any of us, getting it to spend in under a minute is no easy task.

In fact, according to CNBC, an average American spends $164.55 in a day in order to survive. Thus, one person needs at least over 6,000 days just to spend one million dollars.

But if it's a minute? That's quite impossible.

RELATED ARTICLE: You can get Extra Stimulus Money if you had Baby in 2020