$300 Weekly Stimulus Unemployment Checks: When Will This Start?

The government lapsed the $300 weekly unemployment benefits without a replacement waiting in the wings on Saturday night. However, the situation changed as President Donald Trump signed the economic relief package as well as the funding package after twenty-four hours of unemployment insurance expiration.

Therefore, the bill would extend the federal unemployment checks for eleven weeks, but with a catch, as per CNET via MSN. According to the bill's language, the stimulus package benefits are meant to kick on Dec. 26, a day before Trump approved the legislation.

The bill's delayed signing means that it will take several days for government agencies and states to organize the bonus unemployment benefit window from 11 weeks to 10, at a loss of $300 per unemployed individual.

Even if the size of the second stimulus check remains at $600 or jumps to $2,000 per eligible American, the benefits for unemployed people are expected to remain static, including the Pandemic Unemployment Assistance program for gig workers, the $300 weekly bonus payment, and the benefits the states provided.

When will the $300 weekly unemployment checks start? 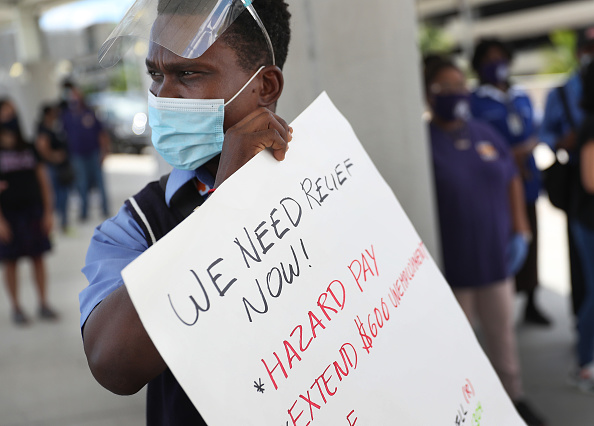 December 26 has come and gone, which is the first date for the bill to take effect. Until March 14, 2021, the unemployment checks are authorized to last. The extension also has an overflow period lasting until April 5, 2021, which will enable a person who is unemployed in early 2021 to receive an additional three weeks of aid.

Meanwhile, the spending bill includes a stimulus check funding for different programs; in early 2021, there could be a larger stimulus package as President-elect Joe Biden takes office. The stimulus bill does not indicate if the unemployment bonus is retroactive or not, The Washington Post reported. Meaning, they would likely not be a federally instituted lump sum payment to make up for the previous weeks they did not receive a $300 unemployment check.

The original CARES ACT had unemployed workers benefit from the state through a federal program called Pandemic Unemployment Assistance (PUA) or through unemployment insurance.

Suppose a gig worker, freelancer, self-employed, or contractor who does not usually receive unemployment benefits laid off could receive PUA instead. A person who made more money from their self-employment could receive an extra $100 a week Mixed Earner Unemployment Compensation. The new program would provide an eligible person an additional $100, but it depends on the state participating. The Mixed Earner Unemployment Compensation might take some time before the states determine if they will or not after the stimulus bill passed.

Who could qualify for the bonus $300 unemployment check?

A person is eligible to apply for unemployment benefits if you have been laid off or furloughed. The application can be made from the state where you live. Once the state approves your application, you can apply to receive state benefits that you are entitled to. There will be no lump sum you could get nationally as the states cover 30-50% of a person's wages.

The CARES Act provided unemployed workers with a $600 weekly bonus check when it was passed in March. However, those payments ended in July. On August 8, Trump signed an executive memo that reinstates the weekly bonus check for a reduced $300 funded by the federal government. These were offered for six weeks to all states that applied for the bonus except for South Dakota.