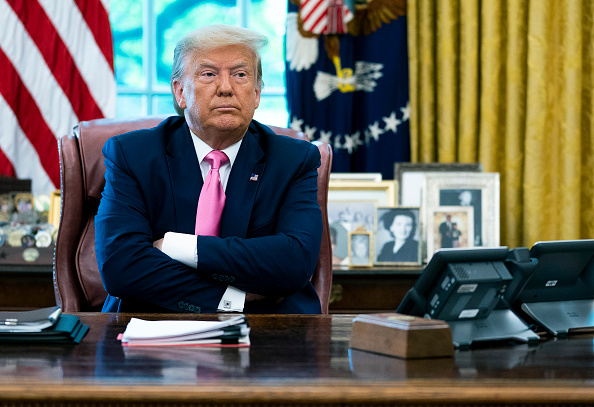 (Photo : Doug Mills-Pool/Getty Images)
Trump Meets With Cabinet Members, Members Of Congress On Stimulus Payments WASHINGTON, DC - JULY 20: U.S. President Donald Trump talks to reporters while hosting Republican Congressional leaders and members of his cabinet in the Oval Office at the White House July 20, 2020 in Washington, DC. Trump and his guests talked about a proposed new round of financial stimulus to help the economy during the ongoing global coronavirus pandemic.

On Sunday evening, Trump signed the economic relief bill after several days of stalling and criticizing the legislation, as per Forbes. The act prevented the government shutdown and clearing for the $600 stimulus checks and the $300 weekly unemployment benefits.

Last week, the House of Representatives and the Senate passed the bill. Still, Trump did not immediately sign them as he described those as "wasteful and unnecessary" provisions in the budget bill. Trump added that the amount of direct payments to Americans in the stimulus bill is "ridiculously low" to Americans.

Two emergency federal unemployment programs had already expired before Trump signed the legislation. Therefore, millions of Americans will see a lapse of benefits until the first week of January under the new legislation.

An enormous economic relief bill in American history, worth $2.2 trillion, was signed in March under the CARES Act, followed by the new stimulus bill that will re-up several vital benefits from the legislation, such as emergency unemployment benefits for self-employed individuals and gig workers and the Paycheck Protection Program of forgivable loans for small businesses.

Through the end of January 2021, the bill will also extend the federal eviction moratorium. However, it will no longer include any new federal aid for local and state governments or businesses' liability protections, two significant points that help up negotiations for months.

According to INC, the $900 stimulus bill expands the eligible expenses for forgiveness, re-opens the Paycheck Protection Program, allows a second draw for businesses that received a loan, targets loans for small businesses, restores deductibility of PPP forgiven expenses, and gives simplified forgiveness under the $150,000 loans process.

The $1.4 trillion spending bill that Trump signed would keep the federal government funded through September. As Congress had approved funding only until December 28, the deadline for passing the bills was only through that date.

Both measures could veto a threat from Trump, who already vetoed a $740.5 billion defense bill, as per the INC. The House is set to vote on boosting the stimulus checks to individuals from $600 to $2,000 on December 28. The House, led by Democrats, favored higher payouts to individuals and attempted to increase the aid to $2,000.

The members failed to pass the measure on December 24 by unanimous consent. It remains unclear when the Senate would vote on the matter. Amid reports of a staggering loss of life and increasing concerns of renewed restrictions that would affect businesses to falter, Trump's move to sign the economic stimulus package came.