Pandemic Effects: Top Business You Would NOT Want to Enter Right Now

According to a survey, since the start of the COVID-19 pandemic, 17% or about 110,000 U.S. restaurants have permanently closed down.

Downfall of restaurants amid pandemic 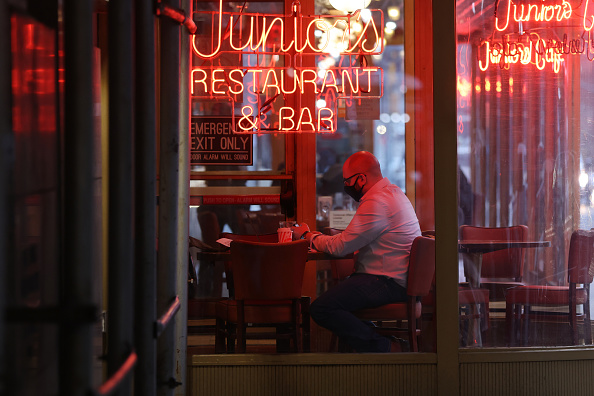 (Photo : Spencer Platt/Getty Images)
New York City Braces For Increase In COVID-19 Cases NEW YORK, NEW YORK - DECEMBER 01: A man sits in a restaurant in Brooklyn on December 01, 2020 in New York City. New York City, and much of the nation, is bracing for a surge of COVID-19 cases following the Thanksgiving holiday which saw millions of Americans travel to see family and friends. According to the COVID Tracking Project, a record-high of 96,039 COVID-19 patients were hospitalized in the US as of Monday.

The restaurant industry has been hard hit by the coronavirus pandemic, as the National Restaurant Association, a restaurant industry group, sent a letter to both Senate and House of Representatives leaders regarding the results of the nationwide survey on the economic plight of restaurants as well as establishments.

Business Insider reported that the letter was sent to the majority and minority leaders on Monday, revealing 17% of restaurants shut down with 10,000 closings in the last three months.

The majority of the closed restaurants were not new in the business, and the Association showed that they had been in business for 16 years on average. Meaning, in a national scale, more than 3 million employees have lost their jobs.

Sean Kennedy, author of the letter and executive vice president of public affairs for the group, said, "What these findings make clear is that over 500,000 restaurants of every business type - chain, franchise, and independent - are in an unprecedented economic decline. Besides, for every month that passes without a solution from Congress, thousands more restaurants across the country will close their doors for good."

The economic picture is still unclear for those restaurants that managed to stay open this year amid the pandemic.

Simultaneously, the survey showed that 58% of both independent and chain restaurants expect that they will have to furlough lay-off workers during the next three months. Besides, most full-service restaurants have seen a 36% sales revenue decline due to coronavirus.

During struggles of restaurants nationwide as they face another round of lockdowns because of the worsening COVID-19 landscape, the survey findings came. Last week, since the start of August, restaurant sales dropped to their lowest level, as per the UBS research.

The fluctuation of sales happened as COVID-19 cases jumped 10% in the U.S. Now, the nation has a total of over 14 million confirmed coronavirus cases and 280,000 COVID-related deaths, according to Johns Hopkins University.

The Association demands a relief plan, including a second round of Paycheck Protection Program (PPP) loans and tax credit to help employers sustain workers with their payrolls.

The Association begs for a federal bailout soon, as per Daily Mail. They explained that if more help doesn't come, 37% of the surviving restaurants would be forced to close after six months.

The industry is begging for a particular bailout, PPE, which was given to all businesses earlier this year and had a long run out. Meanwhile, other services have resumed safely, but dining remains at the forefront of restrictions.

In New York City, approximately 12,000 restaurants are expected to shut down, half of the city's total. Governor Andrew Cuomo said Monday that he would close indoor dining as early as next week if the COVID-19-related hospitalization rate does not stabilize in the city.