Monulparivir: New Antiviral Drug That Completely Suppresses the Transmission of the COVID-19 in 24 Hours

The COVID-19 vaccine would be the answer to end the pandemic. But even if the vaccine distribution starts today, it won't be enough for all people who need it worldwide. 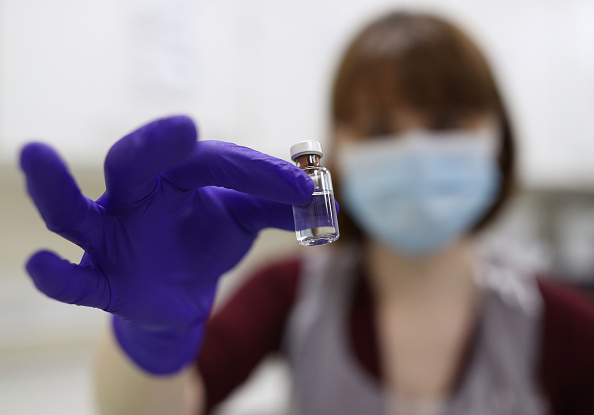 (Photo : Yui Mok - WPA Pool/Getty Images)
Staff At Royal Free Hospital Simulate The Preparation Of The Pfizer Vaccine LONDON, ENGLAND - DECEMBER 05: An NHS pharmacy technician at the Royal Free Hospital, London, simulates the preparation of the Pfizer vaccine to support staff training ahead of the rollout, on December 5, 2020 in London, England.

A new antiviral drug, Molnupiravir or MK-4482 / EIDD-2801, can manage to "completely" stop the transmission of the virus within 24 hours, as per the Institute of Biomedical Sciences of Georgia State University studies.

Researchers explained in the published work in the journal Nature Microbiology that it is the first demonstration of an oral drug available to quickly block the transmission of SARS-CoV-2 that would be a game-changer.

According to Entrepreneur, Emory University in Atlanta developed Molnupiravir through an innovation company Drug Innovation Ventures at Emory (DRIVE), licensed by Ridgeback Biotherapeutics, and partnered with Merck & Co. The antiviral drug was initially being made to treat the flu and prevent the coronavirus from duplicating itself and creating errors amid viral RNA replication.

Tests were carried out on ferrets and observed that they reduced the number of viral particles and the experts' details. Then, ferrets were put to others, which had not been treated. In the second group, none of the ferrets became infected with COVID-19.

Dr. Robert Cox, the co-lead author of the study and a postdoctoral fellow in the Plumper group, said, "We believe that ferrets are a relevant transmission model. Because they easily spread SARS-CoV-2, but for the most part they do not develop a serious disease, which is very similar to the spread of SARS-CoV-2 in young adults."

Cox added that they observed early that the antiviral drug has a broad-spectrum activity to fight respiratory RNA viruses. Besides, the oral treatment of infected animals with the Mogul Parivar reduced the number of viral particles spread by different magnitude orders, which reduced the transmission. Monulparivir's properties are a powerful candidate for the pharmacological suppression of COVID-19, the report adds.

COVID-19 patients treated with the antiviral drug could be non-infectious within 24 hours of the initial treatment if the ferret-based data will be translated to humans. Monulparivir can be taken orally, and treatment can start early for a triple potential benefit: shortening the infectious phase to alleviate the emotional, shortening the infectious phase to lessen the emotional and socioeconomic cost of prolonged patient isolation immediately contain local outbreaks.

The antiviral drug is now on an advanced phase II/ III clinical trial and is being tested in three various doses every 12 hours within five days in patients with COVID-19.

Americans are skeptical about the COVID-19 vaccines, with a "warp speed" timeline that blunts confidence and fears political interference in the shots. According to NBC News, two promising vaccines lead the release within weeks; experts in immunization behavior and ethics say they assume attitudes to shift from widespread hesitancy to urgent and heated demand.

Dr. Paul Offit, a vaccinologist with Children's Hospital of Philadelphia, said in a recent JAMA Network webinar, "People talk about the anti-vaccine people being able to kind of squelch uptake. I don't see that happening."

Read also: Why a COVID-19 Vaccine Won't Be a Magic Bullet for the Economy Any Time Soon